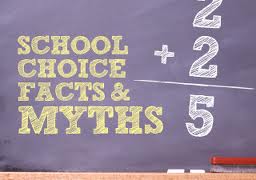 The assertion that school choice somehow exacerbates segregation and separatism in American society surprises me every time it pops up. The ideal of traditional public education, a “common school” available equally at no cost to all citizens to impart a high level of academics as well as a core set of American values, has always been a myth. Yet it has amazing staying power despite the facts.

Put aside a hundred years of state-sanctioned racism that outlawed education for slaves, and then engendered “separate, but equal” schools for another 90 years until the 1954 Supreme Court decision banned the practice. Let’s look at how this “common school” system serves Americans now.

When city demographics are analyzed, the segregation of traditional public schools dramatically jumps. Forty-two percent of African-Americans and 39 percent of Hispanics are in schools with 75 percent or more of those same students. Not surprisingly, school enrollment and especially urban school enrollment reflects how a public education monopoly assigns students to schools – by zip codes.

Combine this data with dropout statistics in the 40-60 percent range for inner-city minority populations, and abysmal academic outcomes for so many of the remaining students, and you have the “common school” myth stripped bare.

Providing parental choice is not the only solution necessary for our education mess. But without it, fixing this situation is a fantasy promoted by those status quo interests in denial in the extreme. Many have forgotten that in upholding school choice in the 2002 Zelman case, the U.S. Supreme Court noted that Ohio in the late 1990s had provided a $2,250 per-student grant, in addition to any other state funding received, to any school district adjacent to Cleveland that would accept students who wanted to attend schools in their districts. Not one district would take even a single inner-city student.

Our suburbs and rural areas reflect many of the same divides, just at a lower level. Plenty of these families are trapped by their zip codes in schools that do not match the aspirations they have for their children, yet they too have few alternatives available.

The other assertion about school choice’s “dark side” – that it will Balkanize Americans and encourage separatist social tendencies rather than promoting common values – has been repeatedly debunked. Patrick Wolf found in an extensive analysis in 2007 that 56 of 59 results from numerous studies suggest that the general effect of private schooling or school choice on civic values trends neutral-to-positive. The analysis included multiple studies that reviewed factors such as political tolerance, volunteerism, political knowledge, political participation, social capital and civic skills.

Notre Dame Professor David Campbell published similar results in 2008 in his paper, “The Civic Side of School Reform.” When compared to public school students, he found private school students more likely to engage in community service, develop civic skills in school, express confidence in being able to use those skills, exhibit greater political knowledge, and express a greater degree of political tolerance. His conclusion was that compared to their publicly educated peers, students in private schools generally perform better on multiple indicators of their civic education.

In my 13 years experience in education reform, I have found families foremost want a quality educational experience that will allow their children to improve their lives. They need it now, not in the serial “five to ten years” that that has been promised for the past 40 years to reform traditional schools in their zip codes. Families are proud of their heritages, but they don’t want to recreate Mexico or Russia or China in their neighborhoods.

It’s time to move past these old, tired challenges to school choice. They have no merit and they divert us from making critical changes that benefit parents and children as well as our overall society.