Beyond the boos for his vow to undo President Obama’s health care overhaul, Republican president Mitt Romney stressed school choice in his speech to the NAACP today, talking up charter schools and suggesting Obama’s ties to teachers unions hampered his efforts to help disadvantaged kids. 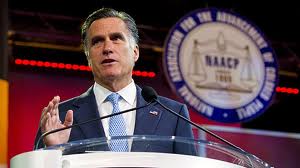 “If equal opportunity in America were an accomplished fact, black families could send their sons and daughters to public schools that truly offer the hope of a better life,” he said, according to his prepared remarks. “Instead, for generations, the African-American community has been waiting and waiting for that promise to be kept. Today, black children are 17 percent of students nationwide – but they are 42 percent of the students in our worst-performing schools.”

“Our society,” he continued, “sends them into mediocre schools and expects them to perform with excellence, and that is not fair. Frederick Douglass observed that, “It is easier to build strong children than to repair broken men.” Yet, instead of preparing these children for life, too many schools set them up for failure. Everyone in this room knows that we owe them better than that.”

Media coverage of today’s event in Houston is focusing heavily on the negative reaction Romney received for his plans to scuttle “Obamacare.” The Republican candidate got a more polite response to his education positions.

Romney noted his support for charter schools as governor of Massachusetts, despite opposition from teachers unions and Democratic lawmakers.He also pitched his plan to allow federal education funding to follow the student to the school of the parents’ choosing, including private schools “where permitted.”

The dig at Obama’s education agenda came without mentioning the president’s name.

“As we saw in Massachusetts, true reform requires more than talk,” he said. “As Governor, I vetoed the bill blocking charter schools. But our legislature was 87 percent Democrat, and my veto could have been easily over-ridden. So I joined with the Black Legislative Caucus, and their votes helped preserve my veto, which meant that new charter schools, including some in urban neighborhoods, would be opened.”