Last week’s commentary in Salon was typical when it comes to the dominant narrative about school choice. Written by Michael Lind, policy director of the Economic Growth Program at the New America Foundation, it describes choice as an “eccentric right-wing perspective” and “an untested theory cooked up by the libertarian ideologues at the University of Chicago Economics Department and the Cato Institute.” 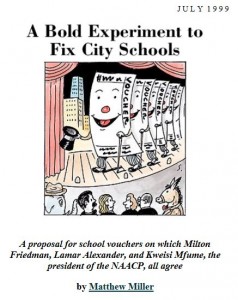 Well-respected newspapers and fringe blogs alike echo that view, though rarely with such creative flourish. The result is a near blackout of a richer, more fascinating and more historically accurate story line – one in which, for decades, if not longer, leading liberals and progressives also thought school choice was a good idea.

Now whether the left has a more compelling case for vouchers and charter schools is a debate for another day. But if more progressives knew their ideological ancestors saw school choice as a powerful tool for social justice, that awareness alone might go a long ways towards creating the conditions where a fair-minded debate is possible.

To that end, we’re introducing a new feature today, “Know Your History,” – an occasional effort to highlight school choice’s roots on the political left. Maybe we’ll single out an academic journal article. Maybe we’ll spotlight an old op-ed. Or maybe we’ll get hold of the Congressional document that lists the 24 Democratic senators who supported legislation, introduced in 1978 by Daniel Patrick Moynihan, to give tax credits to families paying private school tuition.

Former redefinED editor Adam Emerson, now writing the Choice Words blog at the Fordham Institute, diligently mined this historical vein during his tenure here (with insightful posts like this one, and this one, and this one). But we’re confident there are plenty of other nuggets worth digging up that will add value to the conversation.

Today’s artifact: a lengthy 1999 piece from The Atlantic. Written by Matthew Miller, “A Bold Experiment to Fix City Schools” sketches the left’s reasoning for embracing vouchers and notes the contributions of John E. Coons, the Berkeley law professor who also serves as a co-host for redefinED. Here’s a taste:

To listen to the unions and the NAACP, one would think that vouchers were the evil brainchild of the economist Milton Friedman and his conservative devotees, lately joined by a handful of desperate but misguided urban blacks. In fact vouchers have a long but unappreciated intellectual pedigree among reformers who have sought to help poor children and to equalize funding in rich and poor districts. This ‘voucher left’ has always had less cash and political power than its conservative counterpart or its union foes. It has been ignored by the press and trounced in internecine wars. But if urban children are to have any hope, the voucher left’s best days must lie ahead.

The voucher left. Has an interesting ring to it, no?