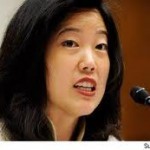 Fresh from Sean Cavanagh at Education Week, after interviewing Michelle Rhee at the DNC:

Rhee was skeptical of Republican challenger Mitt Romney’s proposal to allow parents to use federal Title I and special-education money for private school vouchers.

While Rhee backs vouchers for impoverished students in academically struggling schools, she said there were far better strategies for large-scale school improvement than Romney’s plan.

Universal voucher plans are not financially feasible, Rhee argued, especially given the state of the economy.

And a large-scale voucher plan like Romney is “only a sliver of what should be happen to fix the system,” she said. “Unless you have a comprehensive set of policies, then that in and of itself is not going to have much of any impact.