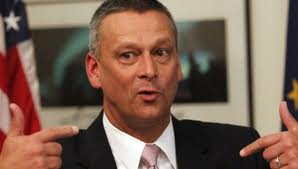 Tony Bennett, the hard-charging Hoosier with a rock-star rep, is the new face of Florida’s school system and its full-throttle reforms.

As expected, the Florida Board of Education voted unanimously Wednesday morning to select Bennett, the former state superintendent in Indiana, over two finalists with lower profiles. In doing so, they opted to give a new and bigger stage to a former science teacher and basketball coach who lost re-election last month, in a shocking upset, after championing school vouchers, school grades and other Florida-style initiatives.

Immediately after the vote, Bennett told reporters that even though his dream job was in Indiana, “there’s only one state I believe is better than that, and that’s Florida. This state is so vitally important to the national education discussion.”

“I look forward to the great things ahead,” he told the board.

Bennett’s salary and start date are subject to negotiation, but the last two commissioners made $275,000 per year. Bennett said he expected to start work in mid January.

Board members discussed Bennett and the other two finalists for four minutes before the vote.

“His ability to get up to speed quickly would be very important for the state of Florida,”  said board member John Padget. And his willingness to travel the state to meet with teachers and other stakeholders “will be absolutely necessary,” said member A.K. Desai.

“Tony has a great record of achievement in Indiana and I am confident he will be a tireless advocate for Florida’s students,” Gov. Rick Scott said in a prepared statement.

As commissioner, Bennett will help oversee one of the biggest and most dynamic school systems in the country. Florida has 2.6 million students, with 40 percent of them attending something other than their zoned school. That’s not by coincidence.

Since Jeb Bush was elected governor in 1998, the Sunshine State has been the nation’s leading lab for the transformation of public education. School grades, school vouchers, third-grade retention, merit pay for teachers – if it was controversial, it seems, it was either tried in Florida first or rolled out here in bigger, bolder fashion. Pressure to improve outcomes is coming from both a tough accountability system and, increasingly, from parent-driven school choice.

Bennett, the fourth commissioner in less than six years, faces even bigger challenges than his predecessors did.

Common Core is coming. And new tests. And more tests. And continued changes to a contentious new teacher evaluation system. And new graduation requirements. And a new grad rate formula that is less forgiving. And huge changes in technology. And, whether critics appreciate it or not, a still-rising demand from parents for ever-more customized learning options for their kids.

So much is coming, in fact, that even some reformers wonder if it might be too much, too fast. State Sen. John Legg, R-New Port Richey, suggested a key to Bennett’s success will be carefully implementing – and perhaps rescheduling – what’s already en route.

“We’ve got one runway and we’ve got to make sure all these big planes land in the right order and in the right way,” said Legg, who chairs the Senate Education Committee and works as a charter school administrator. If all these changes are “not implemented correctly and in a timely manner, all the planes can kind of crash in on themselves.”

Legg was referring to high-profile mistakes that marred the tenure of former Commissioner Gerard Robinson, who left in August after a year on the job. In May, the state board voted to lower the passing mark on the state writing test after a higher bar resulted in plunging pass rates. In July, the Department of Education announced it got more than 200 school grades wrong.

Due in part to those errors, Bennett will inherit an accountability system that has never been more under fire. Education funding cuts that reached historic levels during the Great Recession have fueled critics’ anger. And now they’re feeling emboldened by the elections, in which Democrats – divided on school choice but fairly united against other reforms – picked up a handful of legislative seats.

Those tensions will remain no matter what Bennett does, said Darryl Paulson, a professor emeritus of government at the University of South Florida St. Petersburg. The teachers unions know the changes in the pipeline now will shape the education landscape for decades, and they’re not about to fade away, he said.

A statement issued after the vote by Rep. Perry Thurston, D-Plantation, was indicative of the divide.

A statement from Florida teachers union president Andy Ford was less diplomatic, saying the union was “disappointed and disheartened.”

Bennett is “a champion of the testing mania, unchecked expansion of charter schools and voucher programs and has proven to advance the Jeb Bush education agenda that has drawn fire from teachers, parents and experts in the field,” the statement said. “That’s the same approach that has led to a flawed and chaotic system in Florida that has frustrated parents and teachers alike.”

In comments to reporters afterwards, Bennett said poor communication with teachers in Indiana was one area where “we probably didn’t do a good job.” He vowed to do better.

The new commissioner can also take some of the edge out of the debate, Paulson said, if he’s as skilled in communicating gains and goals as he is in crafting policy. NAEP scores, AP results and graduation rates all show Florida has made steady, substantial progress, particularly with black, Hispanic and low-income students. Just this week, an international assessment of reading skill showed Florida fourth-graders finishing second in the world, just behind their peers in Hong Kong.

Yet the perception remains that Florida is an academic backwater.

“I think an effective leader could make a pretty clear case that we’re doing much better (in education) than we were 20 or 30 years ago,” Paulson said. “And we’ve made that progress not because we’ve doubled the budget … but because we’ve instituted real reforms.”

“If I was the incoming education commissioner, that’s something I would be stressing.”