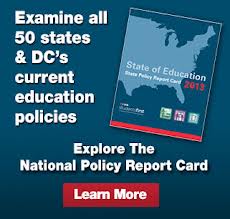 Florida earns a C- for policies and program aimed at empowering parents, but that’s good enough for a No. 4 ranking nationally, according to a report card released today by StudentsFirst.

Overall, the state earned a No. 2 rank – and a B- grade – from the report, which looked at progress in three areas: elevating the teaching profession; empowering parents; and spending wisely/governing well. Louisiana came in at No. 1, also with a B- grade. A dozen states earned F’s. StudentsFirst is led by Michelle Rhee.

Among other areas, Florida got dinged a bit for its tax credit scholarship program (which is administered by Step Up For Students, the co-host of this blog). In short, StudentsFirst doesn’t think the program is funded enough or accountable enough, although the report doesn’t spell out how it falls short on the latter.

The program is available to all low-income students – which we think is a good thing – but the report says it should be limited to low-income students in “chronically failing public schools.” The report also says Florida should amend the program to provide a scholarship amount “that is competitive with private school tuition.” The amount this year, $4,335, is far below the amount spent per student in Florida public schools.

With charter schools, the report says Florida should allow other bodies besides school boards to be authorizers (although that involves issues with the state constitution). It also says the state should reform “skimming provisions” that allow school districts to keep up to 5 percent of charter school funding.