Editor’s note: The Rev. Manuel Sykes is pastor of Bethel Community Baptist Church and president of the St. Petersburg NAACP, an active chapter on Florida’s west coast. In this commentary, he responds to a recent Tampa Bay Times column that criticized a federal tax credit scholarship bill offered by U.S. Sen. Marco Rubio. The Times also published a letter to the editor from Rev. Sykes in today’s editions. 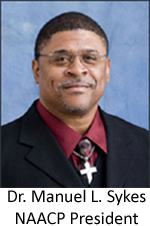 Florida offers the nation’s best lesson on whether private school options can help poor children, but the Tampa Bay Times seems uninterested in what these parents and students are telling us. Instead, it is busy pointing a distinctly partisan finger.

Argue if you want about whether the federal government should provide K-12 scholarships to low-income students, but the tax credit scholarship plan introduced by Republican U.S. Sen. Marco Rubio is not “bankrupt” or “craven.” It is instead a learning option that economically disadvantaged students wouldn’t otherwise have, and to label it as “money laundering” represents the kind of rhetorical excess that cheapens our public debate.

In Florida, more than 50,000 students are on a similar plan, and the results are encouraging to those of us who work with struggling children. The students who use the Florida Tax Credit Scholarship are truly poor – incomes barely above poverty and averaging less than $25,000 for a household of four – and more than two thirds of them are black or Hispanic. State research tells us they were among the lowest academic performers in the public schools they left behind, and testing results show they are making the same academic gains as students of all income levels nationally. Just as encouraging, the traditional public schools that are most impacted by students who choose the scholarships are themselves experiencing higher learning gains.

The educational results don’t seem to matter to those who prefer instead to dismiss scholarships as some kind of Republican conspiracy. Never mind that nearly half the Democrats in Florida’s Legislature also support this option, including a majority of the Black Caucus. Never mind those of us who work in disadvantaged communities in St. Petersburg and see children for whom these opportunities can make the difference between a diploma or a jail cell. Never mind that the Black Alliance for Educational Options, which represents elected black Democrats across the nation, has expressed its support for Rubio’s bill.

Sen. Rubio will have to defend his bill, should it get a hearing in the Senate. But to dismiss the concept as a “retread” is to miss the plight of the very children for whom public education is most essential. Barely half the students on free or reduced-price lunch in Florida read at grade level today, and we can no longer accept an education system designed in the late 19th century that treats every child as though he or she has the same educational needs.

We know now that different children learn in different ways, and that’s why progressive public educators are looking to provide as many alternatives as possible. That may mean a traditional neighborhood school, a magnet program, a charter school, an online course or even a private school option. The point is to match the child with the environment that works best.

The school founded by our church, Bethel Community Christian School, proudly serves 16 low-income children who benefit from the Florida scholarship. We are required to administer a nationally norm-referenced test to these children every year, and we must earn the trust of our parents every day. We would never argue that Bethel is right for every child, but for some it has been an educational blessing.

To cast these learning options as contrary to public education is to treat the needs of public school students as though they are beside the point. The parents I know who choose these scholarships are not trying to make a political statement; they just want their children to succeed. Let’s not politicize the future of our children. There are plenty of other issues to “gridlock” over. Those who are contributing to the rhetoric and waiting game don’t realize that our children cannot be the wager in this political “poker game” between Democrats and Republicans, most of whom are wealthy anyway.