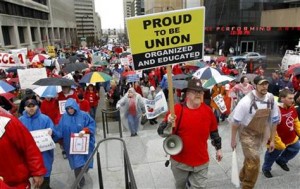 For decades dominated by traditional public schools, the landscape of public education is changing fast. New species are thriving – charters, vouchers, virtual, you name it – and who knows what nimble subspecies and hybrids are on their way.

Can teacher unions, so shaped by an earlier era, adapt?

We posed that question to a handful of ed reformers who have thought deeply about these issues. Next week, we’ll bring you their answers. You’ll hear from Terry Moe, the William Bennett Munro Professor of Political Science at Stanford University and Senior Fellow at the Hoover Institution; Joe Williams, executive director of Democrats for Education Reform; Gary Beckner, executive director and founder of the Association of American Educators; and Doug Tuthill, president of Step Up For Students and former president of two teacher unions.

We asked several current teacher union officials to contribute to our series, but they declined. One told us the current climate within the union made it politically unsafe to do so. We remain eager to publish the views of teacher union officials, and don’t hesitate to reach out directly to me at rmatus@sufs.org or (727) 580-1577.