Editor’s note: This is the first post in our series on the Democratic Party’s growing divide over ed reform and ed choice.

Public education has always existed at the crowded intersection of race, class, money and power. While both political parties have had to navigate the confluence of these cross currents, over the last 50 years the Democratic Party has been the most impacted. 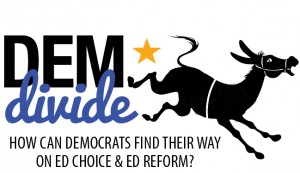 The recent Vergara v. California decision suggested teacher unions, which primarily represent a white middle-class constituency, are an obstacle to providing low-income children of color with a quality education. I spent the first 16 years of my professional career as a teacher union leader, and I agree. The industrial unionism teachers have been using since the 1960s is a major impediment to equal opportunity for low-income children. But the problem isn’t bad people; it’s a bad system.

Over the years, I’ve worked with thousands of teacher union leaders from across the country. With very few exceptions, they are all wonderful people who care deeply about meeting the needs of low-income children. But they are tethered to an early 20th Century model of industrial unionism that is taking them down, and dragging public education, low-income children and the Democratic Party down with them.

Today’s relationship between teacher unions and low-income communities of color, and the influence teacher unions have over the Democratic Party and black elected officials, can be traced back to a contentious political struggle that occurred in 1968 in New York City.

Ocean Hill-Brownsville was a predominantly black and Hispanic low-income community in Brooklyn. Community members were unhappy with the education their children were receiving from the New York City school district, and they won the right to manage their community’s public schools.

Local control, though, conflicted with the NYC teachers union’s model of industrial unionism, which required a centralized, command-and-control management system. So the primarily white teachers union went on strike in May 1968 to force NYC to take back control of Ocean Hill-Brownsville public schools.  The strike continued until Nov. 1968, and the struggle was intense. But ultimately, the union prevailed.

During the strike, most black middle-class leaders sided with the union. This class-trumps-race dynamic is common in U.S. politics and education. A similar alliance famously arose in 1964, at the Democratic Party’s national convention in Atlantic City. That’s when legendary black Congressman Adam Clayton Powell joined white liberals such as Walter Mondale and Hubert Humphrey to oppose seating the majority black and working-class Mississippi Freedom Democratic Party delegation.

The political alliances and organizational models that emerged from the Ocean Hill-Brownsville conflict are still prevalent today.

Most of public education still adheres to a centralized, command-and-control management system. Charter schools, virtual schools, vouchers, homeschooling, dual enrollment and tax credit scholarships are all challenging this hegemony, but 90 percent of today’s students are being educated in school districts where vital decisions, notably resource allocation, are made centrally.

Teacher unions are still embracing the industrial unionism that emerged from the steel, coal and automobile industries in the late 19th and early 20th centuries. They still consider attempts to empower low-income and working-class families as existential threats to public education. And they’re still getting support from most middle-class black leaders and elected officials.

In Florida this year, only one black Democrat in the Legislature, Rep. Daphne Campbell, voted to support empowerment of low-income families during the most recent legislative session. In North Carolina, Rep. Marcus Brandon has faced fierce opposition from fellow black Democrats for his advocacy of equal educational opportunity for low-income and minority families.

All this puts the Democratic Party in conflict with its core values. The party believes in equal opportunity and social justice for low-income and working-class families, and it knows empowering these families and their communities is a necessary condition for them to be successful. But when parental empowerment and local control conflict with the teachers unions’ financial and political interests, the party sides with the unions and not these families.

This dilemma within the party won’t be resolved until teachers abandon industrial unionism. The two most effective unions in the United States are the National Rifle Association and the AARP. They’re not industrial unions, but they are unions, and they are far more effective politically and financially than today’s teachers unions. Teachers should adopt this model.

Unlike today’s teachers unions, the NRA and AARP do not require their members to be part of a centralized bureaucracy. Their members are united by common values and interests, not by location. An NRA-AARP type teachers union would be able to advocate for teachers working in a variety of settings, including museums, libraries, district schools, virtual schools, art galleries, charter schools, homeschools, tutoring businesses, private schools, YWCAs, and Boys and Girls Clubs. The work setting would be irrelevant, just as where NRA and AARP members work — or where American Bar Association lawyers and American Medical Association doctors work — is irrelevant. (The ABA and AMA are also non-industrial unions.)

The future of public education is customized teaching and learning. The days of one-size-fits-all instruction delivered in a large industrial factory are ending. Emerging new technologies, and new organizational structures and ways of work that are accompanying them, are not going away. Teacher unions need to adapt to this new reality. It will allow them, almost five decades after the Ocean Hill-Brownsville political war, to finally find common ground with low-income and working-class families and communities.

Finding this common ground will free up black elected officials to support their communities without worrying about political retribution from their local teachers union. And it will allow the Democratic Party to finally maintain fidelity to its core values in K-12 education.

Imagine President Obama, the former inner-city community organizer, being free to say that low-income children should have the same learning opportunities as his children, and the children of other affluent Democrats. That would be a great day for the Democratic Party, and for our country’s low-income children.

Doug Tuthill is president of Step Up For Students, which co-hosts this blog, and a former teachers union president.