The average household income of K-12 schoolchildren on Florida’s tax credit scholarship dropped by nearly $700 this year, placing it only 4.5 percent above poverty. 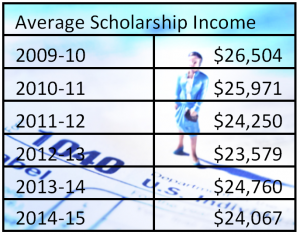 That’s the result of preliminary calculations from Step Up For Students, the nonprofit that helps administer the scholarship and also cohosts this blog. As of Monday, the scholarship was serving 68,768 students in 1,510 private schools across the state — an increase of roughly 9,000 students from last year. The average household income was $24,067 and the average household size was 3.8.

Program officials are not sure what explains the drop. It may be tied generally to the economy, as the jobless rate still suffers and wages have stagnated for those at the lower end of the income scale. It could be that public school students who are at the lower end of the income threshold for free or reduced-price lunch are more inclined to seek the scholarship option. The threshold for the school lunch program, which is also the eligibility level for new scholarship students this year, is 185 percent of poverty or $44,122 for a household of four.

The average household income for the school choice scholarship students has fluctuated in recent years, and was as high as $26,504 in 2009-10. In the state’s annual reports on test score gains, the researcher has repeatedly taken note of the lower average income for scholarship students. As he wrote in this year’s report: “Scholarship participants tend to be considerably more disadvantaged and lower-performing upon entering the program than their non-participating counterparts (in public schools). These differences are very similar to those observed in years past and reported in prior program reports.”

Changes made to the tax credit scholarship law this year  extend the income eligibility for new students to 260 percent of poverty in 2016-17, but the law requires that lower income students be served first and provides only partial scholarships to any student whose household income is above the school lunch standard. At the top income level, which equates to $62,010 for a household, students would receive a half-scholarship.