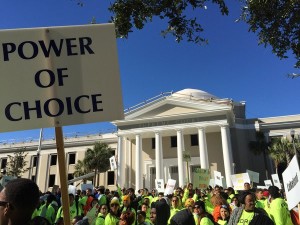 If a lawsuit challenging the nation’s largest private school choice program succeeds, it could prompt “drastic” changes in Florida law and cast doubt on other policies that encourage charitable giving, lawyers for scholarship parents argue in newly filed court papers.

The parents have intervened in the lawsuit challenging Florida’s tax credit scholarship program. They want the state Supreme Court to deny the statewide teachers union’s request to hear an appeal of two lower court rulings, which held the groups supporting the lawsuit do not have standing to bring the case.

This stage of the case deals only with whether the plaintiffs have standing, and not the constitutional merits of the program.

This school year, the scholarship program helps roughly 95,000 low-income and working-class children afford private school tuition. Step Up For Students, which publishes this blog and pays my salary, helps administer the scholarships.

The program allows companies that donate to scholarship organizations like Step Up to receive dollar-for-dollar tax credits. Both a Leon County circuit judge and a unanimous panel on the First District Court of Appeal ruled the case should be dismissed, noting the Florida Education Association and other plaintiffs could not show the program harms public schools, and that the scholarships are not funded out of the state treasury.

In legal briefs filed today and signed by Howard Coker, a past president of the Florida Bar Association, lawyers for the parents write that courts have allowed church groups to use government buildings and the state to offer tax deductions for charitable contributions. Citing a ruling by the Arizona Supreme Court, they contend that those long-standing practices could face new scrutiny if a court finds tax credits are essentially the same as public funds and allows the Florida lawsuit to proceed.

“Petitioners’ argument that not only the use of public funds, but even the facilitation of private contributions is constitutionally prohibited, would require drastic changes in the law,” they write.

In its petition asking the high court to hear its appeal, the union made an oft-repeated assertion that the tax credit program was a “successor” to a school voucher program ruled unconstitutional in 2006. Unlike tax credit scholarships, the vouchers were funded directly from state coffers and diverted money that had been earmarked for public schools.

The union’s lawyers contend supporting scholarships with tax credits instead of direct appropriations amounts to a “‘money laundering’ scheme” in which lawmakers support a private school choice program “while evading constitutional review because no funds have been ‘appropriated.'”

In today’s filings, the parents’ lawyers counter that the tax credit scholarships were created in 2001, five years before the high court struck down the Opportunity Scholarship Program in Bush v. Holmes. “The Legislature did not intend the Tax Credit Program to replace the OSP, but to operate alongside it,” they write.

Florida is one of 15 states that offer tax credit scholarships. The brief notes many of those programs have been challenged in state or  federal court, and that three state Supreme Courts and the U.S. Supreme Court have all ruled in favor of the scholarships, while no state high court has ruled against.

In a separate brief filed Tuesday, lawyers for the state also argue there is no need for the Supreme Court to hear the appeal. There is no set timeline for the court to decide.

As the case has dragged on, several plaintiff groups have dropped out. Associations of school administrators and school board members both left the case last year, and this week, Politico Florida reported that the statewide PTA organization has also decided to leave the case, though the move is not yet reflected in court documents. Groups that remain on the union’s side in the lawsuit include the Florida NAACP, the League of Women Voters and Americans United for Separation of Church and State.