The most commonly cited price tag for Florida public schools represents only two-thirds of what they actually spend, a new report from Florida TaxWatch shows. The “true cost,” it says, shines a more favorable financial light on public education alternatives.

“To be good stewards of education dollars,” writes TaxWatch president Dominic Calabro, “it is critical that taxpayers have a clear understanding of how much education revenue is available, how that revenue is spent, and what it is spent on. Without this understanding, taxpayers and policymakers will be unable to determine whether their state and local K-12 education investments are cost-effective.”

As the Florida Legislature enters the second week of an annual session that already is punctuated by budgetary duress, the report tackles perhaps the most widely misunderstood funding formula in public education. It’s called the Florida Education Finance Program (FEFP) and was adopted in 1973 as a way to provide the appropriate balance of state and local funding for basic school operations. 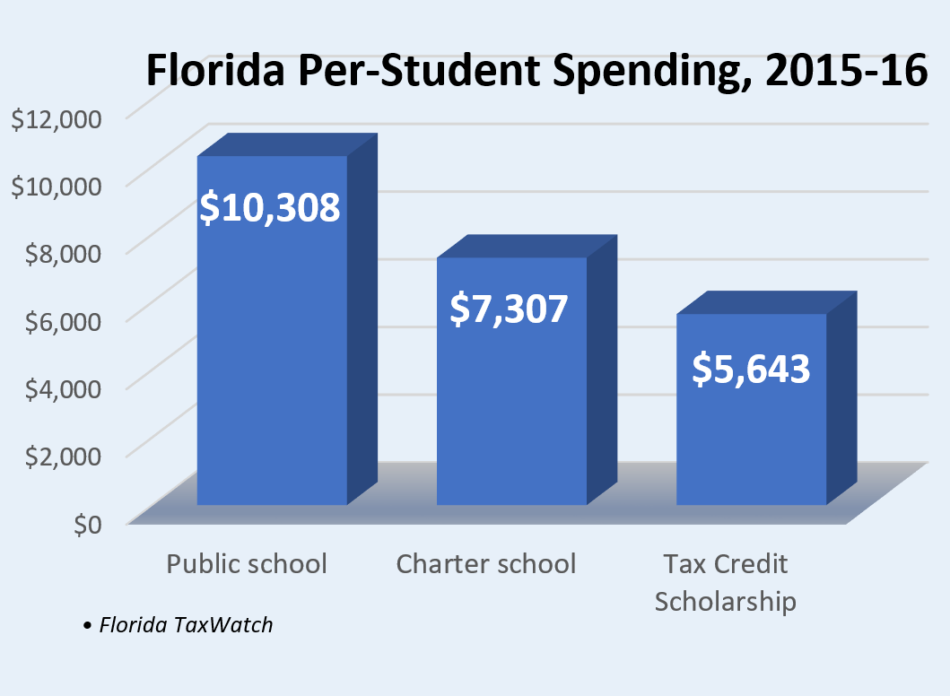 Lawmakers adopt an FEFP per-student spending target each year, and news media generally report the number as though it were the bottom line. But it is not. School districts and the state spend a variety of other tax dollars through separate appropriations, local property tax programs and county sales taxes unrelated to the FEFP.

Last year, lawmakers adopted an FEFP per-student average of $7,178. But TaxWatch turned to district financial profiles created by the Department of Education to determine the average amount school districts spent on each student last year was actually $10,308.

The “true cost,” as TaxWatch terms it, is especially relevant when comparing traditional public schools with charter schools and scholarship programs that are indexed mostly to the FEFP. The report projects charter schools last year spent $7,307 (the operational amount plus a small portion for construction), which is 71 percent of the cost of district-run public schools. Economically disadvantaged students on the Florida Tax Credit Scholarship* received an average of $5,643 – or 55 percent of what a traditional public education student received.

“During periods of constrained revenue, it is important that every dollar is accounted for and spent wisely,” TaxWatch concludes. “… Charter schools and private school scholarships provide competitive alternatives to traditional district schools.”