Editor’s note: This feature originally appeared in redefinED just over five years ago on Jan. 22, 2014. At that time, the school served 270 students from kindergarten to eighth grade. Today, its award-winning program offers two tuition-free schools in Tallahassee, the second serving kindergarten through fourth-grade students. It maintains its status of being among the highest ranked schools in Leon County and is in the top 10 percent of schools in the state based on Florida School Rankings. It also has been recognized as one of 10 excellent charter schools in Florida by the Florida Charter School Conference.

By all accounts, she’s a top-notch science teacher. She works in a charter school. Is that a coincidence? It’s a tough question to answer, even for the teacher herself. But more and more educators are mulling similar questions. It’s inevitable as more school choice options bloom, and teachers, like parents, find themselves thinking more deeply about what works best for them and their students.

Julie Sear is the lone science teacher at The School of Arts and Sciences, a K-8 charter school in Tallahassee. It’s trim and modest, a clutch of red and yellow brick nestled among oak-draped hills. There’s no library, no gym, no lunch room, no computer lab. The school is so unassuming and half-hidden beyond all the moss, even many locals don’t know much about it.

Which is too bad for them. Last year, 95 percent of Sear’s students passed the state’s eighth-grade science exam (it’s only given in fifth- and eighth-grade). That’s double the state average. Only 29 of the state’s 600-plus middle schools managed a pass rate above 80 percent. Only 10 cleared 90 percent.

It’s true the demographics for the 270 students at SAS aren’t the most challenging. Forty-one percent are minorities, 21 percent are eligible for free- or reduced-price lunch. The state average is 59 percent for both. But it’s also true SAS leaves more affluent schools in the dust, including three in the same district where science pass rates came in at 58, 66 and 75 percent.

What makes the difference?

Sear, 42, is a 14-year teaching veteran who taught in district schools before she joined SAS, for less pay and no tenure, in 2006. She’s a Midwesterner with a biology degree, a resume that includes six years on a boat and enough proud geek in her to wear a shirt that says, in Star Wars font, “May the Mass Times Acceleration Be With You.” (Physics joke!)

Ask her the difference-maker question, and she offers a list.

For starters: independence, autonomy, flexibility. Unlike many district schools, there is no pacing guide at SAS, no rigid calendar that dictates what must be taught and when. Asked a week before a reporter’s visit what she’d be teaching that day, Sear emails back: “I can’t plan that far ahead!!” “I have total control,” she says in an interview. “I look at all the standards and I get to say where I’m going to teach things, and how I’m going to teach it.”

Then, there’s this: SAS is small and close-knit and … nimble. It was founded in 1999 by teachers and parents. It’s not bound by convention. Sear has 88 students in classes that include sixth-, seventh- and eighth-graders. That means a wider range of skill level. But it also means more familiarity with how students learn, where they’re coming up short and what can get them up to speed. “I got a pulse on them that is really strong,” Sear says.

SAS is also tough to get into. Not because of special admission standards (beyond living in the district, there are none), but because of demand. Every year, more than 200 students apply for 15 to 20 open slots, leaving the school with 750 to 1,000 on its waiting list. That, Sear says, leaves SAS teachers with leverage many district teachers don’t have.

A Matchbox car. A tack taped to its hood. A trio of middle school boys.

In Sear’s first period, a project: Make a Rube Goldberg contraption with at least five energy transfers. Boy one nudges the car towards a balloon, which butts up against one of those pendulums with a series of spheres on strings, which is next to another toy car, which is tracked towards a marble, which is then supposed to dribble off the edge of the counter into a cup on the floor. Car rolls. Balloon pops. Pendulum swings. The second car rolls, but stalls before it can ram the marble.

“Not enough force,” Sear says. “What can you do different?”

Next try: Car rolls. A bigger balloon pops. The pendulum swings. The second car rams the marble. The marble rolls … and rolls … and (hold your breath) … stops at cliff’s edge. Ahhhh, the boys groan.

But they smile, too. 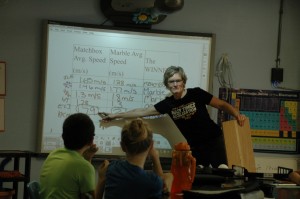 Sear’s class at SAS is noteworthy for what it doesn’t have. No textbooks. No lavish equipment. No admonitions to get this right because it’s going to be on the FCAT (the dreaded state test). No fear of failure. And usually, no force-fed information.

“Who agrees? Who disagrees?” Sear says during a class debate. The topic: data reliability in an experiment involving the speed of toy cars and marbles on very short ramps. She points to a girl at random: “Defend.”

“I’m not going to tell you any right and wrong answers,” Sears says a few minutes later, as she invites others to offer explanations in front of the class. “You’re going to have to deal with that.”

They do. And they love it. Asked what accounts for their success, the students offer many of the same answers as their teacher. Many were in district schools before SAS. Many gush about the school they’re in now.

“Instead of just memorizing things, we learn how to figure them out.”

“If we don’t do something with enough enthusiasm, Miss Julie reminds us that we chose to be here.”

Florida has yet to get the credit it deserves for pace-setting gains in reading and math. But it hasn’t gotten the same traction in science. Some school choice supporters see potential for growth there.

For example, charter schools, freed from the complications of collective bargaining, theoretically could embrace meaningful differential pay – a potentially useful tool for luring and keeping STEM teachers. There’s also a small but growing number of charter schools, such as the high-minority, high-performing Orlando Science School, that put STEM front and center. Parents are drooling over them.

Coincidentally or not, schools of choice lead the Florida pack in science. Ten of the 29 highest-performing middle schools are charter schools. Seven are magnet schools. On the other hand, there’s no doubt some district schools excel in science, and that they too have rock-star science teachers.

In Sear’s case, then, how much of her success hinges on SAS being a school of choice in general, or a charter specifically? Is there something about charter schools or other choice schools that makes them more likely to create the conditions that maximize teaching talent?

Sear’s principal says yes. So does a parent at the school. So does one of Sear’s colleagues, a science teacher at a district school, even as he and the others acknowledge Sear would probably soar anywhere.

“I am not micromanaging her,” says the principal, Julie Fredrickson, who taught in district schools for 14 years. “Districts are more likely to feel the need to have more control.”

A charter school “takes the big boss off your shoulder,” said Susie Merkhofer, who has two kids at SAS.

In district schools “teachers tend to homogenize their curriculum,” said Charles Carpenter, a 15-year physics teacher in the district where SAS is located.

Carpenter is on sabbatical and working at Florida State University, on a professional development program that helps teachers increase their physics knowledge. He said research vouches for Sear’s approach to science instruction – yet, for reasons that befuddle him, many district schools have yet to follow suit.

So does Sear think it’s better in a charter school?

She won’t say yes or no. Instead, she put her thoughts down in a lengthy email, pointing to a combination of things that she says makes a difference.

To make a long story short … our school does a fabulous job of making me feel VALUED and empowered. I feel that my efforts are appreciated, that my voice is heard, and that my opinions matter. …

Yesterday, I mentioned to you that leadership is key. I don’t know if “charter” is the key.  Maybe, in the charter schools led by national management companies, the small school feeling is lost in the top-down leadership. It would be interesting to find out more about the other high performing charters. Are they led through big management companies or are they more grass roots in nature?  Does that make a difference?

Basically, does teacher value/empowerment equate to successful teaching and learning?