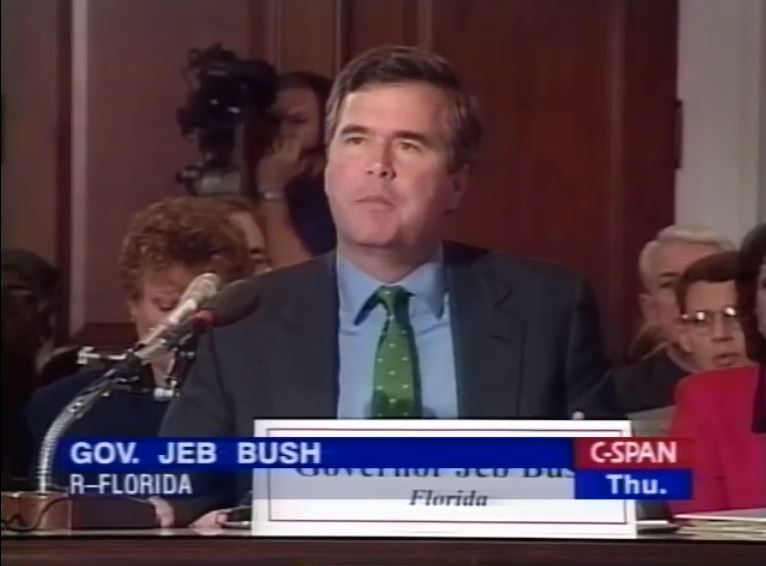 Twenty years ago this week, Gov. Jeb Bush spoke before the House Education Budget Committee about Florida’s recently passed A+ Plan and the state’s first voucher, the Opportunity Scholarship Program.

“It’s been fun, in all honesty,” Bush said with a smirk, “to watch the myths that have been built up over time when you empower parents.”

Those myths were shattered, Bush said, though he admitted the program was only just a few months old at that point. Nevertheless, two decades of evidence have proved him correct.

By the time of Bush’s presentation, the Opportunity Scholarship had awarded scholarships to 134 students at two schools in Pensacola. Seventy-six of those students used the program to attend another higher-performing public school, while 58 used the voucher to attend a private school, according to Bush’s testimony.

The first myth Bush called “the brain drain,” which occurs when only the high-achieving kids leave public schools. But according to Bush, the students on the program were no more or less academically advantaged than their peers who remained behind.

The third and final myth he called “the abandonment myth” — schools where students leave will spiral ever downward.

• Students attending private schools with the help of the scholarship are among the lowest-performing students in the public schools they leave behind.

• Today, 75 percent of scholarship students are non-white, 57 percent live in single-parent households, and the average student lives in a household earning around $27,000 a year. Researchers at the Learning Systems Institute at Florida State noted that these students are also more economically disadvantaged than their eligible public-school peers.

• More importantly, scholarship students are achieving Jeb Bush’s goal of gaining a year’s worth of learning in a year’s time.

• Even the abandonment myth remains untrue. Overall, public schools with large populations of potentially eligible scholarship students actually performed better, as a result of competition from the scholarship program, according to researchers David Figlio and Cassandra Hart.

When Jeb Bush took office just 52 percent of Florida’s students graduated. Today 86 percent of students graduate. According to the Urban Institute, students on the scholarship are more likely to graduate high school and attend and later graduate from college. State test scores on the Nation’s Report Card are up considerably since 1998 too. And when adjusting for demographics, Florida, which is a majority-minority state, ranks highly on K-12 education compared to wealthier and whiter peers.

There’s still room for improvement. But the naysayers at the turn of the century have been proven wrong.