The population of rural America has declined by 12.5% since the 2000 Census, but it could be poised for a comeback. Education freedom has a large role to play.

In Rustic Renaissance: Education Choice in Rural America, Jason Bedrick, a research fellow in the Center for Education Policy at The Heritage Foundation, and I explore two mutually exclusive claims made by choice opponents: first, that choice has nothing to offer rural communities because of a lack of choice schools; and second, that school choice programs will destroy rural school districts as families flee to their innumerable other options.

Obviously, these claims cannot both be true, and in fact, both are false. To reverse the decline, rural America desperately needs young families, and a rural education renaissance beckons in the return of the one-room schoolhouse. 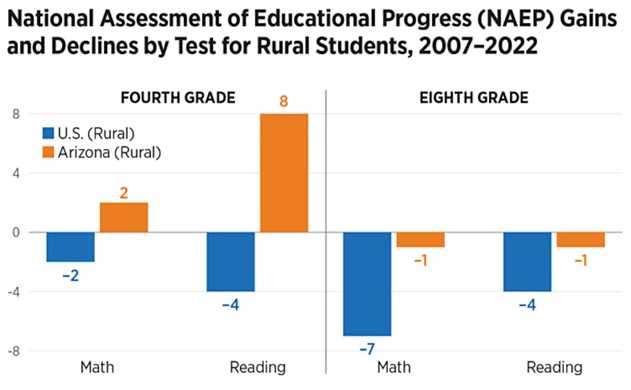 Microschools hold a special promise for rural America. Population density always has been a deterrent to the growth of large choice schools in rural communities, and the advent of higher borrowing and construction costs will only further the trend.

Microschools, however, often operate out of informal community spaces and homes and thus do not require either high-population density or expensive capital investment. A more pluralistic set of schooling options will help attract and retain young families, who are a large part of rural America’s most urgent need.

As Step Up For Students’ Ron Matus has documented here and here, former public school teachers are flourishing in rural Florida. This speaks to the traditions of rural America, that “spirit of association” that Alexis de Tocqueville noted as the uniquely American method of challenges through voluntary association.

“One size fits all” schools actually fit few in rural America and elsewhere. Academic stagnation and population decline can successfully be combatted by allowing voluntary associations and exchange to flourish in rural American education.

Rural families have nothing to lose and a world to gain by rediscovering the promise of the one-room schoolhouse.