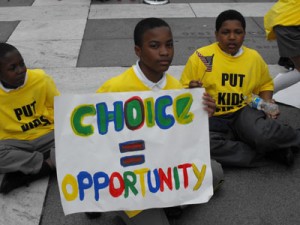 Low-income students in the Duval school district, which corresponds with the city of Jacksonville, trail more affluent classmates by double-digit percentage points when it comes to passing the state’s standardized math and reading tests. That’s not unusual. But they also trail other low-income students. When the results for low-income students in Florida’s 12 biggest school districts are compared, Duval ranks last in both subjects. (The 2010 figures showed 47 percent of Duval’s low-income kids reading at grade level or above, while 52 percent were doing math at grade level or above.)

This is not meant to disparage the hard work and dedication of public school leaders in Duval. But it does call into question the certitude with which they reject learning options that could help. Andy Ford, the president of the state teachers union, is a former union president in Duval – and definitely not a fan of vouchers or tax credit scholarships for low-income kids. Neither is influential Duval school board member W.C. Gentry or Save Duval Schools, one of the state’s most organized and media-savvy parent groups. From public hearings to the state Capitol to letters to the editor, they’ve relentlessly stayed on message: School choice is bad, a fraud, a conservative plot to enrich greedy corporations.

Expanded school choice “really takes us back to the haves and have-nots,” Gentry said in a Dec. 2010 radio interview. “The wealthy, the rich, the people in the know – they will figure it out. The poor, the disenfranchised, those who do not have that kind of support system – they will fall into the cracks and we will further enhance the disparity we now have in this city and this state between the haves and have-nots.”

“It makes little sense to continue diverting tax dollars that serve the entire public school system to private school voucher programs that produce no measurable advantage for the relative few who use it,” a Save Duval Schools supporter wrote in a newspaper op-ed last September. “It makes little sense, that is, to everyone but the corporate giants, like Walgreens, who use the tax credit.”

The latest shot at choice – a piece about charter schools by Tonyaa Weathersbee, a columnist at the local newspaper –  is hardly the most egregious. But as part of this pattern, it’s worth noting.

Weathersbee – who has written movingly about the hurdles faced by low-income families – is on point about some things: The think tank report she cited, which gives Florida high marks for its charter school laws, does sound a bit simplistic; charters in Florida do get a disproportionate share of F grades; and there’s no doubt the F earned by the heralded KIPP charter in Jacksonville was a disappointment. But then Weathersbee goes too far, ripping charters as a whole and calling their overall performance subpar. “Charter schools are supposed to offer students, especially students in struggling schools, a better chance to succeed academically,” she wrote. “But that isn’t happening.”

According to a report released this week by the Florida Department of Education, charter school students in Florida outpaced traditional public school students in 145 of 168 FCAT categories last year. Low-income students in charters were among those doing better across the board.

A DOE report on charter schools last year showed the same pattern. But Weathersbee ignored that report and instead referred to a 2009 Stanford University study that found charter students in Florida were not doing well by comparison. I don’t know why the DOE and Stanford reports came to different conclusions. But for what it’s worth, the DOE report isn’t the only one to find encouraging things happening in Florida charter schools. A 2008 study by other highly regarded researchers, for example, found charter school students in Florida graduated at much higher rates than students in regular public schools. It’s unfair to trumpet the unflattering findings of one analysis while ignoring others that are favorable, or not explaining why one study is more compelling than the others.

The point here is not to say that vouchers and charters are the end-all-be-all for low-income kids. Or that there aren’t legitimate concerns about them, just as there are about traditional public schools. But they deserve fair-minded scrutiny. They can help public schools — with the unbelievably tough job public schools have been given — by offering more potential remedies to low-income kids.