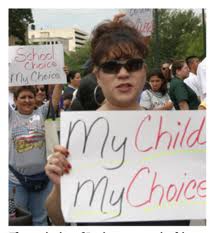 Editor’s note: As momentum builds across the United States for expanded school choice, it is important to understand the movement’s legal and philosophical foundations. For more than 40 years, John E. Coons, redefinED co-host and professor of law, emeritus, University of California at Berkeley, has argued that parents – and not government – have the primary legal and moral responsibility and authority to educate their children. Coons is a powerful thinker whose reflections are best consumed slowly and with respect. Enjoy this special post.

It takes a village to raise a child—or so they say, and perhaps it’s true. Humans are interdependent, and every particular village -whatever that word means – has influence, for good or ill.

But the phrase is murky and subject to many interpretations. It can be read as the quirky proposition that the village is what logicians call a “sufficient condition” of some outcome; alone, by itself, it determines the bundle of effects that will be the person called Andrew or Susie.

An equally strange interpretation converts the term into a moral proposition: The thing called “village” actually ought to raise the child, displacing all competing influence; whatever its peculiar norms and culture the village itself is the official moral standard for child-raising. If there is strong variety among villages, this proposition would be hard to swallow. At some point one begins to grasp that – in minds that love the metaphor – the word “village” has come to imply more than the old neighborhood.

As we watch these enthusiasts we gradually understand that this transcendence of the village is a two-fold concept: First, the all-good village has morphed into an idealized version of the nation itself; but, second, the corporate mind of this perfected nation mirrors the preferences of whichever speaker is using the expression. Village means what he wants it to mean.

I remain thoroughly puzzled by this modern mystique so often introduced to justify our coercive assignment of children from have-not families to schools of the state. The claim seems to be that, for such a kid, it takes a village and therefore … Therefore what? One awaits today’s favorite battle cry inviting us all to go out and occupy something – in this case the mind of the child. Let us occupy Jimmy!

In all these village slogans it seems forgotten that, in the first place, it took families to create the village. While the village may be important, it is not the concept of village, but that of parent (as part of family) that will allow us to disentangle the intellectual mess we have made of the various relations of the child to village, to state, to parent and to family.

This state of our culture and its favorite metaphors bears upon educational choice.

We can and should celebrate “family,” but in thinking about the ways in which America disposes of her children we must distinguish family not only from village, but from parent. Family is a word useful in social science, politics and religion with diverse meanings among cultures. Only one of these meanings expresses the specific legal relation that holds between the child and one particular adult (or, at most, two) who holds the power to decide where and how the child is to be schooled. Parental authority is precisely that legal attribute lodged in the adult person who, together with the child – and generally others – constitutes the family in this society.

Here, then, is my quick take on the parent-child relation as the unique system of law that they are. By “law” here I will adopt the meaning of the most up-to-date positivist; law is “a rule of external human action enforced by a sovereign authority.” The parent is exactly that sovereign authority for 18 years in respect of her own child. This is true whether this custodial parent is single, a drop-out, homosexual, or adoptive. She alone decides that little John shall rise at 6:30, and then determines what he shall wear to the school she has chosen. She makes countless rules, and then enforces them with physical duress – including spanking. Yes, there are limits; John is born with rights. But these are few indeed, and exist only at the extreme.

And her authority is more than a delegation from that Great Village we call the “State.” The state does not, and did not, delegate this authority that it never held in the first place. Simply put, in 1787 sovereign parental authority existed as a relation recognized by the Common Law to pre-exist the state. The federal constitution and its “powers reserved to the people” explicitly recognize and respect such primordial authority. Recall the 10th Amendment.

As we have seen in the history of the Pierce decision, the parent was and remains the practical sovereign over what will be taught the child apart from basic skills. She may choose any school or none, as the success of home and virtual schooling make plain today. As De Tocqueville put it, in America the parent-child relationship is a “domestic dictatorship.”

The real question for us here is how to get practical support for such authority. When we argue for choice we can, of course, wave the flag of freedom. We should be clear, however, that this is the freedom not of the child – or even the family – but of the parent. And this parental freedom to indoctrinate the child is clearly a part of the constitutional armory of what lawyers call speech rights. It constitutes true speech, not only in its message to the audience that is the child, but to that other audience that is the world. To choose a school is to deliver a message and exercise free speech.

The specific benefits of choice, both for the individual and the village, are too many even to name here. In our discourse none must be lost, even as we properly praise competition and markets. My only specific example today will be the reform of the family itself and in turn, reform of the village. The empowered parent is the most promising agent of broad reform in society through restoration of the responsible American family.

Suppose one day that social psychologists at last dare to study systematically the differences it makes in family life to have or to lack practical choice in your child’s schooling. Today our wealthier families cherish choice as an encouragement to family integrity and personal responsibility. To make and, then, to enforce, law for one’s own child is seen as an experience good for the adult commander, the maturing child, the family and the village. Suppose such serious academic inquiry also shows conversely that conscription of the child by the state correlates with the enveloping passivity of all parties concerned and with a general withdrawal from personal responsibility.

Will the state conscripter still argue that some great purpose is nonetheless served? What purpose?