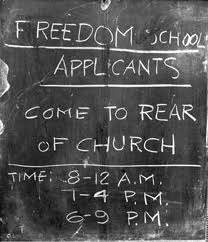 * After the Civil War, blacks in the South who were tired of waiting for the government to organize schools – or who were dissatisfied with the quality – built schools themselves.

* During the civil rights movement, activists in both the north and south established alternatives to segregated, second-rate schools.

* In the 1960s, leading progressives proposed private-school vouchers because of anger over failing inner-city schools.

Historical gems like these sparkle throughout “The Secret History of School Choice: How Progressives Got There First,” a 2005 academic journal piece by Georgetown University law professor James Forman Jr.  From Reconstruction to the civil rights era to the “free schools” and “community control” movements – indeed, for most of American history – progressives have been a leading voice for choice.

So forget what you hear from choice critics and read in the newspaper. The parents who use vouchers and tax credit scholarships to help their kids can’t be shoved into one political box or another. The same goes for the political and philosophical roots that sprouted those options. Conservatives have advanced compelling reasons for school choice. So have progressives.

“School choice – especially vouchers and, to a lesser extent, charter schools – is generally understood to have a conservative intellectual and political heritage … choice is associated with free-market economist Milton Friedman, attempts to defy Brown, wealthy conservative philanthropists, and the attacks on the public school bureaucracy by Ronald Reagan and George W. Bush.”

“It turns out that conventional history is incomplete … too often missing from the historical account is the left’s substantial – indeed, I would say leading – contribution to the development of school choice. In this Essay, I trace that history, arguing that school choice has deep roots in liberal educational reform movements, the civil rights movement, and black nationalism … “

Forman doesn’t hide his agenda. He wants to give modern progressives – the source of so much passionate opposition to choice – good reason to think twice.

“While some liberals have embraced choice proposals, others have rejected them on the grounds of their segregationist heritage. The incomplete view of history has distracted some from the issue that I think matters most, which is how choice is implemented. Accordingly, understanding the history of progressive choice proposals – including even school vouchers – might offer today’s liberals a way to have a more nuanced conversation about school choice.”

My predecessor at redefinED, Adam Emerson, did awesome work digging up and showcasing the progressive foundations of school choice (in posts like this and this). I hope to keep bushwhacking the trail he blazed.

Enjoy the Forman piece. And if you have any suggestions for similar pieces, please let me know.