Editor’s note: I just updated the post at 7:15 p.m. I’ll continue to update it as I see more reaction in news stories, press releases, etc.

It’s official: Louisiana has a new, statewide voucher program. With a Catholic school as a backdrop, Gov. Bobby Jindal today signed into law a bill that allows the state to pay private-school tuition for many low- and moderate-income students. 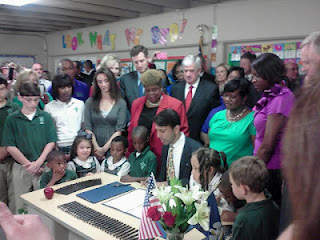 Jindal also signed off on other sweeping education changes, including making it easier to fire ineffective teachers and to create charter schools. Here is a roundup of the immediate reaction from supporters of school choice and ed reform:

From the American Federation for Children: “This is a great day for low-income children in Louisiana, whose parents will finally have the opportunity to give them the chance at an amazing education that they deserve,” said Kevin P. Chavous, senior adviser to AFC. “Thousands of students who were stuck in schools that were not working for them will now have an opportunity to attend a school that fits their needs and, ultimately, allows them to succeed.”

From the Foundation for Excellence in Education: “Louisiana is clearly committed to adopting and implementing reforms that will improve the quality of education for their students. These policies allow more families to select the best education options for their students and empower schools’ superintendents and principals to retain effective teachers in their schools,” said Patricia Levesque, the foundation’s executive director. “Building on the data-driven accountability system they adopted in 2010, Louisiana is on the fast track towards becoming a national leader on student-centered reform. Thanks to the bold leadership of Governor Jindal, Superintendent John White and state lawmakers, Louisiana and its students will have a brighter future.”

From the Friedman Foundation for Educational Choice: “States are realizing that school choice works,” said Robert Enlow, the foundation’s president and CEO. “The more that states can move from limited school choice to universal availability, the greater its benefits will be to those in need. Indiana is witnessing this now. So, too, will Louisiana.”

From Chiefs for Change: “These student-centered reforms will completely transform Louisiana and its students,” said Tony Bennett, Chairman of Chiefs for Change and Indiana Superintendent of Public Instruction. “Students will no longer have to settle for failing schools. Countless families will be able to select the best education option for their unique student’s needs. And superintendents and principals will be empowered to hone faculties of talented, dynamic, and effective educators. Armed with these bold reforms, Louisiana will soon lead our country in quality public K-12 education.”

From New Orleans Archbishop Gregory Aymond: Referring to the changes altogether, he told the Associated Press, “Ultimately it will break the cycle of poverty.”

From the Black Alliance for Educational Options: “This legislation will allow some of the state’s most vulnerable children to attend private schools where their educational needs might be better addressed,” said BAEO President Kenneth Campbell. “Our team has received nearly 300 phone calls, emails, and other inquires since the bill’s final passage from parents trying to find out when scholarships and other educational options will be available. At the same time, we recognize that this is only an initial step toward ensuring all children have access to greater educational quality.”

From Louisiana BAEO: “Having been actively involved with the parents of the 1,800 children participating in the current scholarship program in New Orleans, we know first-hand the impact it’s made on the lives of low-income families,” said Eric B. Lewis, LaBAEO’s State Director. “We look forward to finally being able to offer families in other parts of the state answers to their long-standing cries for help and more options. We can finally let them know that help has arrived.”

From the Heartland Institute: “Gov. Jindal has just moved the scrimmage line closer to the end zone for all states on school choice,” said Joy Pullmann, research fellow at the institute. “His example shows governors what is possible with concerted effort on education. Education entrepreneurs are already pinpointing Louisiana as the place to innovate on blogs across the country. Watch for Louisiana to ditch its near-last-place finish on education achievement in coming years, and to spur creative ideas in education that spread to benefit the entire country.”