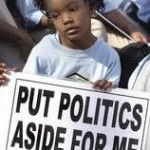 Families who benefit from expanded school choice options – charter schools, virtual schools, vouchers, tax credit scholarships – are increasingly being portrayed as pawns in a coordinated campaign to privatize public schools. That’s especially troubling given that the voices of those families are so rarely included in the conversation.

The latest example: Statements from a movement to end high-stakes, standardized testing.

United Opt Out National, which led an effort over the weekend to “occupy” the U.S. Department of Education in Washington, D.C., says it wants to “end Wall Street Occupation of Education.” Among its goals: An end to “the use of public education funds to enact school ‘choice’ measures influenced and supported by the corporate agenda.”

This story in The Florida Independent about the group’s efforts (a Miami-Dade teacher/parent is among the group’s leaders) focused most specifically on its concerns about for-profit charter schools. But by referencing vouchers and tax credit scholarships, the story suggested those options were also part of a plot to undermine public schools.

That kind of characterization about school choice is happening more and more as newspapers and TV stations echo the emotional story line that gets repeated the most.

We heard it in the parent trigger debate in Florida, in the fight over vouchers in Louisiana, in the scrum over tax credit scholarships in South Carolina. “Privatization” is getting as much traction in the national ed reform debate as “socialized medicine” did in the battle over health care. And it’s just as off base.

Rarely do reporters talk to parents who benefit from vouchers, tax credit scholarships and other choice options. Many of them are low-income parents who aren’t as organized as their more affluent peers across town. They’re vastly outnumbered by their counterparts in established public school parent groups, like Parents Across America and Orlando-based Fund Education Now, who actively court media attention and use it to advance the privatization narrative. And so, for all practical purposes, they’ve been invisible.

It’s a lot easier to rage against privatization when it’s an abstract concept. It’s a different story when you talk to real parents with real kids who now have real hope for the future because of options that are being demonized. All these parents did was what most of us do unapologetically: They found the best schools they could for their kids.

I talked to choice parents when I was a reporter. I found their stories moving and, in some cases, their frustrations with traditional public schools understandable. I’ve only been here at my new job about a month, but I’ve already heard from a few more of those parents.

One emailed me the other day to say thank you for the blog. When I told her she made my day, she wrote back, “You just don’t know how this scholarship has helped us.”

Please tell me: Does she sound like a corporate pawn to you?