If there were any doubt that Democratic presidential politics drove the Obama administration’s decision Monday to keep D.C. Opportunity Scholarships alive another year, Education Secretary Arne Duncan removed it with his tortured statement by way of public explanation. 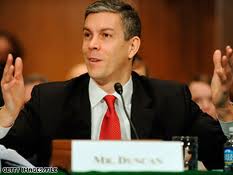 “The President and I are committed to ensuring that the education of the children currently in the D.C. Opportunity Scholarship program is not disrupted,” Duncan wrote. “We remain convinced that our time and resources are best spent on reforming the public school system to benefit all students and we look forward to working with Congress in a bipartisan manner to advance that goal.”

Unfortunately, this has become the go-to talking point for the secretary when asked to defend his administration’s opposition to a scholarship that is helping struggling low-income students in the District of Columbia. Never mind that Duncan’s own agency has determined that the students who take the scholarship are performing at higher academic levels, that the program has strong support from parents, and that Congress has cushioned even any perceived financial impact on traditional D.C. public schools by giving them an extra appropriation. The president simply won’t cross the teacher unions on vouchers.

Rather than acknowledge the political pickle, Duncan is left tripping over his own words and basic common sense.

Not much more than a year ago, Duncan told a Washington audience of education reformers that: “In this country, for decades, probably for centuries, wealthy folks have had access to two, three, four, five, six great learning options. And poor families have often been relegated to one choice, and often that choice wasn’t a very good one. And the more we can empower parents and help them figure out what the best learning environment is for their child, help them understand what their child’s strengths and weaknesses are, and give them a menu of great options, and let them vote with their feet and figure out where they want to go – I think that will help to create a system of improvement.”

Now he seems to be saying that we can’t walk and chew gum at the same time – that empowering those parents to find “the best learning environment” will somehow get in the way of improving the public options. Duncan, an astute Harvard-educated man, knows better.

Florida itself is one example. For more than a decade, the state has provided private options for low-income children along with private options for disabled students and privately operated charter schools that now serve one of every 15 students. Over that same period, the performance of students in traditional public schools – particularly the performance of low-income and black and Hispanic students – has improved across a variety of measures. In some cases, the improvement has been significant.

So let’s not pretend that providing a learning option for one set of students is somehow a distraction from the interests of them all. That runs counter to the evidence and to the parental empowerment theme the secretary uses when he is not trying to cover for these baldly partisan games with the D.C. scholarships.