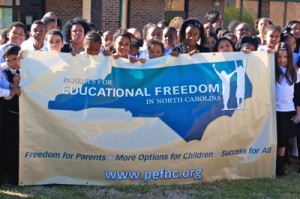 An attempt to bring a tax credit scholarship to low-income children in North Carolina succumbed to a short session and broader tax and education politics as the General Assembly adjourned on Tuesday. But the effort is worth noting in part because of the group pushing it.

Parents for Educational Freedom in North Carolina is a diverse, progressive organization with a membership of 60,000 and is led by a home-grown talent, Darrell Allison, who has a legal and civic mind and has worked in the White House and the U.S. Department of Justice. Allison and his team bring both a zeal to help struggling low-income children and a concern for getting the policy right and making the program accountable. (Disclosure to readers: I worked with PEFNC in preparations for the bill.)

The bill that ultimately was filed, HB 1104, fell short of the type of academic testing requirements the group was seeking. But overall the language kept faith with the 1,200 people who rallied at the Capitol in May, the 4,000 calls and emails that urged lawmakers to act, and the Democrats who signed on as co-sponsors. Importantly, at a time when some tax credit scholarship programs are coming under scrutiny for laws that lack genuine accountability and transparency, Allison and his team were trying to make sure their program had plenty of both.

The “Equal Opportunity Scholarship” was to be funded by contributions from companies that in turn received a dollar-for-dollar tax credit, and the scholarships were to be restricted to students with genuine economic disadvantage – those with household incomes not exceeding 225 percent of poverty. Scholarship organizations could not be tied to any school and could not allow donors to designate that their money go toward any particular student or school. The scholarship itself was to be $4,000, or just under half the amount the state and local governments spend on each public school student. Early fiscal evaluations showed that some versions of the bill saved money even when factoring only the state portion.

The bill also required full audits and extensive public reporting for scholarship organizations, and financial reports for any school receiving more than $500,000 in scholarship money each year. As for testing, the bill attempted to provide a method to examine the academic progress of scholarship students, but ended up a little muddled in the execution of that goal.

PEFNC and its legislative supporters faced some predictable pushback from public school groups but, to its credit, took the criticism largely in stride. “This measure is not about overthrowing our public-education system, but an ideal way to complement our public education system,” Allison wrote in an op-ed published in the Winston-Salem Journal. “At the end of the day, it is about making education more fair and equitable for all children, regardless of income or ZIP code, so that they can fully receive their constitutional right to a quality education for generations to come.”

PEFNC will be back again next year, and don’t be surprised if they bring more Democrats with them. Republicans have strong majorities in both chambers and are in a position this fall to reclaim the governor’s office, but Allison has worked hard to build bipartisan support. After all, many of the children who stand to benefit from the scholarship are represented in the Assembly by Democrats.

Next year, with a full session, we’ll get to see where those lawmakers stand.