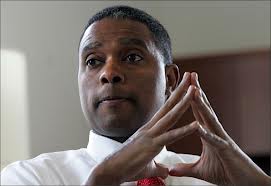 Florida education commissioner Gerard Robinson has made what appears to be an anguishing personal decision to return to his family in Virginia, because his wife, a law professor, has been unable to find a comparable position in Florida. And yet the announcement Tuesday was greeted with a level of vitriol that can only speak to the state’s nasty educational divide.

An anti-testing group released a statement deriding Robinson’s “so-called accomplishments” as tied to a testing system that “has been completely discredited.” A Democratic lawmaker called the departure “a clear indicator … that recent destructive education reform measures … are harmful to the morale and productivity of students and teachers.” A Florida School Boards Association leader accused Robinson of “doing the bidding” of the state Board of Education, as though she doesn’t expect the same of her own superintendent. Predictably, the Washington Post’s Valerie Strauss offered a conspiracy theory – that Robinson was being offered as a “scapegoat” to divert attention from the FCAT. A Democratic congresswoman who should know better actually called for a federal review of the FCAT.

You get the picture.

Now, it is certainly true that the Department of Education had issues with the FCAT writing test and bungled the initial release of school grades this year. And it is also true that much – maybe too much – rides on the performance of students on state testing. But nothing in Robinson’s 13 months on the job warrants such public venom, and you don’t have to defend him to recognize his convenience as a punching bag. So let’s call this another temperature check in the fever over educational accountability.

Partisan politics play a significant role in these attacks, and the education budget cuts of recent years have strengthened the emotions, particularly in an election year. Yet the animated attacks are still a curiosity. First, Florida has experienced demonstrable success in public education over the past decade. Second, the kind of dramatic change that is taking place – particularly in the arena of school options – is on a trajectory of its own at this point. Parents, for one, are going to keep demanding more options than just their neighborhood school.

The next commissioner will face the same audience as Robinson and the same conundrum. How can there be so much opposition to strategies that, on the whole, appear to be helping? His successor will be the fifth commissioner since the job was converted to an appointed position in 2003, and the board will need to look at how the job expectations have changed. Neither of the last two governors has put education policy out front and center, which has exposed the leadership challenges for appointed commissioners who have enjoyed little tenure.

When that void is filled by a congresswoman who calls for a federal investigation or a leading newspaper that asserts testing credibility has “collapsed completely,” then it may be time for everyone to take a deep breath. The board and its new commissioner may never be able to reach those whose only strategy is to oppose, but they might be able to build a working coalition that embraces progress and assures that policies are well-constructed and well-understood. Parents in Florida have reason to be excited about the way education is being customized to fit the needs of their children. There are still legitimate debates to be waged, but the acrimony just gets in the way.