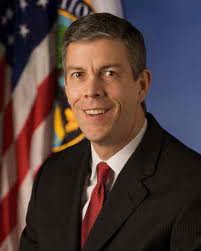 I’m here tonight as a parent with two young children who attend a wonderful public school. No one has more at stake in this election than our kids, and that is why we need to re-elect President Obama!

Our president knows education is about jobs. It’s about giving every child a shot at a secure middle-class life. Right now, we’re in a race for jobs and industries of the future. If countries like China out-educate us today, they’ll out-compete us tomorrow. The president believes that education begins at home with parents who take responsibility. But he also believes that teachers matter. In his first two years in office, he helped save the jobs of 400,000 educators.

And President Obama didn’t just invest resources; he demanded reform. And 46 states responded by raising education standards. The president also believes teachers must be respected and paid like the professionals they are. No teacher should have to teach to the test. Great teachers should be recognized and rewarded.

And President Obama also knows that higher education is an economic necessity. He fought to keep student loan interest rates from going up. He fought for Pell grants. He took the big banks out of the federal student loan program and passed billions of dollars in savings on to young people. This year alone, he helped nearly 10 million students afford college.

The president knows that the path to the middle class goes right through America’s classrooms. That was his path. That’s America’s path. However, his opponent believes differently.

Under the Romney-Ryan budget, education would be cut by as much as 20 percent. Think about what that would mean: 200,000 fewer children in Head Start, fewer teachers in the classroom, fewer resources for poor kids and students with disabilities, fewer after school programs. Ten million students could see their Pell grants reduced, putting higher education further out of reach. And these cuts wouldn’t create jobs or pay down the deficit. They would go toward a huge new tax cut for those at the very top.