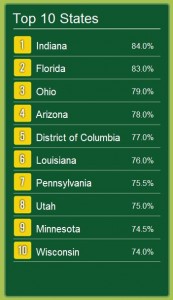 We like to think of Florida as School Choice Central, but there is more competition for that title every year and, alas, according to the Center for Education Reform, it may now belong to Indiana. The Hoosier State takes the top spot in the center’s newly created “Parent Power Index,” released today, while Florida comes up short by a hair.

The center credits Florida for being a leader in private learning options and online course enrollments. But it says the state should allow independent bodies such as universities to authorize charter schools (there are constitutional questions here) and adds that “funding of charter schools in Florida has become increasingly inequitable.” It also notes: No parent trigger law.

Indiana, meanwhile, gets praise for its fledgling statewide voucher program and a “much tested and improved charter school law.”

The center says the upcoming movie Won’t Back Down inspired the index, which “measures the ability in each state of a parent to exercise choices, engage with their local school board, and have a voice in the systems that surround their child.”