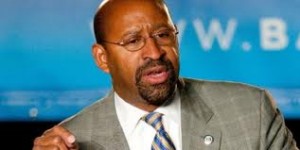 In Orlando back in June, Philadelphia Mayor Michael Nutter and other big-city Democratic mayors convinced the U.S. Conference of Mayors to unanimously endorse the idea of parent triggers – and were promptly savaged by critics. They were tools of ALEC, profiteers, enemies of public schools.

Nutter just spoke to the DNC a few minutes ago, and if he’s a right-wing fringie out to gut public education, he’s also got a bright future as an actor. Frankly, with tonight’s script, he sounded a lot more like an establishment Democrat than a reform-minded one. But the point isn’t to critique Nutter’s positions on education policy. It’s to note that some particularly vocal ed reform critics have become so rigid, they’re disparaging – and potentially alienating – fair-minded people who actually agree with them much of the time.

Here are the prepared remarks for Nutter’s speech:

I’m honored to serve as mayor of my hometown where our founders started America with three simple words: “We, the people.” And when they said “people,” they didn’t mean “corporations.”

I’m most honored to be the father of Christian and Olivia, and a proud parent of a public school student.

My wife, Lisa, and I know Olivia’s education is central to everything she, and everyone in my city, wants to achieve. In Philadelphia, our public safety, poverty reduction, health and economic development all start with education. We can’t grow the middle class if we don’t give our kids the tools they need to innovate and invent.

But first we have to invest in them. That’s what President Obama did, saving 400,000 educators’ jobs and giving states the flexibility to shape their schools.

Mitt Romney doesn’t get it.

To Mitt Romney, education is a luxury. As governor, he vetoed universal pre-K. In his first year, K-12 schools saw drastic cuts that led to teacher layoffs.  He failed his students.

What has he learned from this?  All the wrong lessons: His budget would mean fewer teachers and bigger class sizes. It’d mean fewer Pell grants, costing our country millions of college graduates.  And he wants big banks back in the student loan business.  And just ask him about affording college, like one high-schooler did in Ohio: Romney’s answer? “Shop around.”

Here are some wiser words from a great Philadelphian, Ben Franklin. He said, “An investment in knowledge pays the best interest.” Sounds like Mitt Romney could stand to learn a thing or two about investing! Our economy grows from the middle out, not the top down.

We’re all in this together. I learned that lesson growing up in West Philly. When I shoveled the sidewalk my parents didn’t let me stop with our house. They told me to keep shoveling all the way to the corner. I had a responsibility to my community.

That’s what being a mayor is about. We take care of our own. We keep our neighbors safe, clear the snow from their streets, and educate their kids. We get stuff done. For Barack Obama, that’s what being president is all about. He knows coming together as a nation starts by coming together as neighbors. That’s why, after graduating, Barack Obama went to a Chicago neighborhood to help jobless workers in the shadow of a closed-down steel mill.

After Mitt Romney graduated, he became a corporate buy-out specialist who closed down steel mills.  Whose values do you want in the Oval Office?  I know who Philly wants, who Pennsylvania wants, who you want.

I know who the middle class needs: President Barack Obama!