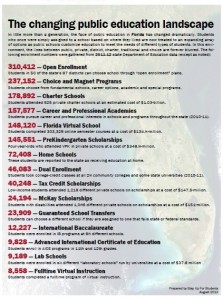 Though we know little about the parents who long have chosen their school through where they decide to live (or to pretend to live), Florida keeps count of those who no longer want their neighborhood school. And here’s some data to chew on: In a state known for its breadth of learning options, that number last school year reached 1.2 million.

In other words, using a conservative approach with new 2011-12 enrollment records, 43 of every 100 students in Florida public education opted for something other than their zoned school.

This number is produced largely from state Department of Education surveys required of the 67 school districts and reflects, not surprisingly, surging growth for choice options. Though total public school enrollment grew by only 1 percent last year, reaching 2.7 million, charters grew by almost 16 percent, online by 21 percent, private scholarships for poor children by 17 percent. (See an enrollment compilation of 2011-12 options here.)

Granted, Florida is not like most other states in this regard. A combination of educational, budgetary and political factors, including the gubernatorial tenure of Jeb Bush, has put the Sunshine State on an accelerated path of parental empowerment. That said, it is a diverse, highly populous state with national political significance, and this kind of transformation is central to the new definition of public education.

The national education debate is still absorbed by adults who grew up with a pupil assignment plan built almost entirely on geography. Many of them went to the same schools as their parents and even their grandparents, and it’s natural they would define public education that way. That may help explain why parent activists or groups such as the PTA continue to oblige the teacher unions that pressure them to resist laws giving parents more options. The union message – that traditional public schools are endangered – plays to the parents’ natural fears.

That’s why these numbers are worthy of pause.

Soon, if not already, a majority of Florida students will be experiencing education in a fundamentally different way than their parents. They and their parents are choosing what works for them – whether a magnet school or career academy or charter school or online course – and that changes the way they think about public education. It is no longer the system of schools run by a school board but a menu of learning programs their government provides for them.

Opponents of these options tend to exploit the line between public and private, but the more that families choose for themselves the less those ownership distinctions will matter. Charter schools were illegal in Florida until just 1996, when charters were signed into law by the late Democratic Gov. Lawton Chiles. Yet in the span of just 16 years, one of every 15 students in the state was attending a charter school in 2011-12. These are private schools by the traditional definition, because they are typically owned by private boards and housed in private buildings, but fewer and fewer parents or educators view them as private.

The change in district-run public schools is no less striking. For example, International Baccalaureate and accelerated magnet programs for high-achieving students are exploding in number. They are public schools by the traditional definition, because they are run by district school boards and located on district-owned property. But they screen incoming students carefully and get rid of those who don’t measure up – an approach most people associate with private schools.

Though charters and vouchers tend to get the political attention, the reality in Florida is school districts are leading this parental empowerment charge. The two biggest choice programs in terms of enrollment are ones fully within the operational authority of the districts. One is an adaptation of the traditional pupil assignment plans called “open enrollment,” with districts providing a zoned school but also allowing students to choose an assortment of other schools in different zones. The other is aimed more at aptitudes and interests, as districts create choice and magnet programs to cater to each student’s strengths. In Florida last year, these two options alone served 547,564 students – or more students than in each of 22 other states.

There will always be a place for the neighborhood school and the bonds it can build in individual communities. But the public education world is changing and the numbers show it.