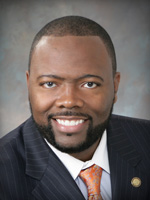 Should Florida’s next education commissioner be committed to the success of all students, no matter what type of educational setting they’re in? Or to public school students first and foremost?

State Rep. Reggie Fullwood, D-Jacksonville, believes it should be the latter. He issued a statement to that effect Friday, following the state Board of Education’s official launch of a search to replace Gerard Robinson, who left at the end of August.

“It is gratifying that the State Board of Education appears to be making it a priority to hire a commissioner who is committed to obtaining the input of parents and education stakeholders as future education reforms are contemplated,” Fullwood’s statement said “However, it is disappointing that the Board, by its actions today, remains anxious to hire yet another advocate for private-schools vouchers or a proponent of private virtual school operators. I believe Floridians expect our next state education commissioner to be committed – first and foremost — to Florida’s public schools and public school students.”

It’s not clear what board actions prompted Fullwood’s conclusion about voucher advocacy. But Fullwood, who sits on two education committees in the House, recently penned his criticism for school choice in a letter to the Jacksonville newspaper. “In Florida,” he wrote, “we have bet the house on vouchers and charter schools.”

As we noted Friday, the state board elected a new chair Friday – Gary Chartrand, a Jacksonville businessman who was instrumental in bringing the first (and so far only) KIPP charter school to Florida. As we have noted before, the Duval County School District, which encompasses the city of Jacksonville, has had less success with low-income students than any other urban district in Florida.