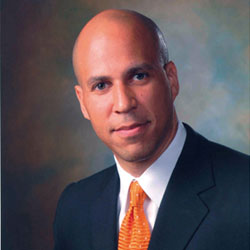 One of the national Democratic Party’s leading lights for expanding school choice, including private school vouchers and tax credit scholarships, will be the featured speaker Saturday at a local Democratic Party event in Tampa, Fla.

Newark Mayor Cory Booker will be the keynote speaker at the Kennedy King Dinner, an annual event sponsored by the Hillsborough County Democratic Party.

“Like the men for whom the event is named – President John Kennedy and Reverend Martin Luther King Jr – he (Booker) has shown great leadership in dealing with tough problems when others saw things as unchangeable,” county party chair Chris Mitchell said in a press release. “Mayor Cory Booker is a leader in our Party, mixing a pragmatic, ‘get it done’ approach with energy and a unique connection with voters.”

Booker is fresh off a powerful speech at the Democratic National Convention that included moving lines about education but did not specifically mention his support for charter schools and vouchers. The press release announcing his speech in Tampa also skips that topic, instead noting Booker has “significantly reduced crime in Newark, championed a $40 million transformation of the City’s parks and playgrounds through a ground-breaking public/private partnership and doubled affordable housing production.”