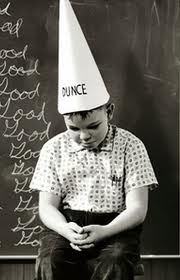 Editor’s note: blog stars is an occasional roundup of good reads from other ed blogs.

As for Florida dumbing down education, as is alleged in the lawsuit, the state ranks first in the country in the percent of 2011 graduates who took an AP exam, sixth in the percent of graduates passing at least one AP exam, and fourth in improving the passing percentage since 2001.

An in-depth analysis by ProPublica last year praised Florida as being a leader in giving low-income students the same access to AP classes as affluent kids.

And while the state’s NAEP scores took a dip in 2011, it ranks second nationally in gains on the national assessments dating back to the 1990s.

In fact, by any measure, the state’s education system is light years ahead of the system that was in operation when Mills helped run Tallahassee. And the biggest beneficiaries have been the students who were routinely ignored back then. Full post here.

Sara Mead’s Policy Notebook: This is why our current education debate is toxic

Richard Rothstein’s American Prospect investigation into the details of Joel Klein’s childhood (no, I’m not kidding here) is really not worth reading, but it unfortunately exemplifies two of the most toxic aspects of the current education reform conversation (fwiw it also contains some interesting information about the history of post-war public housing in NYC):

Personality over policy: The point of Rothstein’s very long article seems to be that Joel Klein’s education policy views are invalid because his childhood was less poor than it has sometimes been represented as being. At a surface level, this is idiotic. Whether Klein grew up in abject poverty or simply in circumstances much more humble than the financial and political status to which he has risen has absolutely nothing to do with whether the education policies he proposes work. Nor did Klein or anyone else ever claim himself as the sole data point for the power good teachers and schools can have on kids’ lives. There’s, um, actual research on this.

What’s more troubling, though is the extent to which our national education debates have come to focus on the character, motivation, experience, and relationships of those who hold different views–rather than on the substance of those views or evidence about how different policies and practices do or are likely to impact kids. This is toxic. It’s possible to have a reasonable and respectful argument about the merits and drawbacks of different approaches for evaluating and compensating teachers, assessing student learning, or improving school performance. It’s not possible to have a reasonable and respectful argument about whether so-and-so secretly wants to destroy public education, or whether so-and-so is a bad person because they receive funding from Bill Gates/teachers unions/hedge fund managers/etc. Full post here.

To be sure, we shouldn’t replace one rigid, centralized approach with another. While the Hess and Meeks vision of schools that deploy talent in smarter ways is attractive, there isn’t a single best way to unbundle education. And that is the reason why choice-oriented reform is a crucial complement to real human capital reform – we need new schools and school networks to experiment with different models.

According to Neerav Kingsland, the CEO of the non-profit New Schools for New Orleans, the key emerging divide in the education world is between reformers and those he calls relinquishers. Reformers are school district leaders who aim to make centralized, government-run educational systems work more effectively by imposing new rules and regulations concerning what school administrators and teachers can and cannot do. Relinquishers, in contrast, believe that the job of the school district is to empower charter school operators to teach as they see fit, subject to oversight from a small and nimble central office.

The caveat is that relinquishers have a special responsibility to shut down schools that fail and help schools that succeed grow as quickly as possible. In New Orleans, where 85 percent of students are enrolled in charter schools, Kingsland’s organization launched seven schools just this fall, and he has also been involved in the wrenching process of shutting failing schools down.

Yet New Orleans is very much an outlier; it is hard to imagine school districts across America voluntarily following the lead of New Orleans. Fortunately, school choice isn’t the only way to drive innovation and experimentation in education. Instead of relinquishing at the level of the school, schools can start relinquishing at the level of individual courses. Full post here.