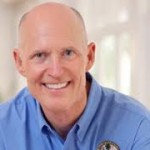 Rick Scott’s ed plans. Charter school expansion is a plank in Gov. Scott’s education plan for the next legislative session, but this exclusive Tampa Bay Times story on it doesn’t offer much detail. Here’s the main part that touches on school choice: The plan includes “lifting enrollment caps on charter schools, removing barriers to choice options in low-performing areas and letting school districts operate their own “charter innovation schools. ‘Our local school districts are going to keep getting better if we give them the authority to do it,’ Scott said.”

School grades work. In this op-ed for The Oklahoman, former Florida education commissioner Eric J. Smith gives Oklahoma kudos for adopting a school grading system. It worked in the Sunshine State, he said, particularly for the kids who needed the most help: “The biggest winners in Florida have been low-income, minority students. Schools that had long failed these students were exposed. Parents were given options to move their children to other schools. And when that happened, poorly performing schools could no longer be ignored or tolerated.”

Op-ed got it wrong on vouchers. Lincoln Tamayo, who heads the highly regarded Academy Prep private schools in Tampa and St. Petersburg, writes in response to a recent op-ed in the Tampa Bay Times that suggested vouchers don’t come with enough accountability.

Florida Virtual School in Education Week. In a story about blended learning. You’ll need a subscription to see the whole thing, but here’s a taste: “Forty-four districts in Florida have now put in place FLVS hybrid or blended learning models, called Virtual Learning Labs, said Tania Clow, a spokeswoman for the FLVS. The virtual school launched the blended programs during the 2010-11 school year, with 152 Virtual Learning Labs across the state. The number has grown this school year to 314, Ms. Clow said. Face-to-face interaction includes the weekly teacher visits, the facilitator, and frequent visits from an FLVS specialist in blended learning who troubleshoots school issues.”