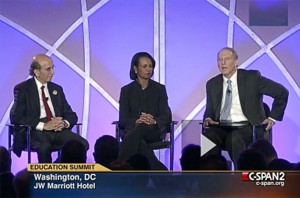 Their three minutes of extemporaneous remarks are well worth your time, and are available through C-SPAN.org here.

In brief, Klein spoke of the way various types of learning options, including charter schools, have helped spur improvements in New Orleans and Harlem: “About a third of the kids in Harlem in the third grade are in charter schools. What’s amazing is the Harlem District went up, and this is apples to apples, went up dramatically from when we started this intensive choice process there to now. … Not only did the charter schools outperform almost everybody, but the public schools … actually moved up significantly themselves.”

Rice spoke to how competitive pressures have produced a “catalytic” effect in higher education, and noted that only wealthier families tend to have choice in a K-12 system where pupil assignment is determined only by geography: “So the only people stuck in neighborhood schools are poor people, and that’s the height of inequality. And that’s why I’ve called it a civil rights issue.”