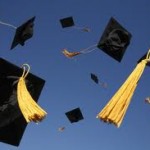 Grad rates. Not good for Florida, according to this new report from the U.S. Department of Education. In 2009-10, the state’s rate was 70.8 percent, putting it No. 44 among all 50 states and Washington D.C. And unlike other estimates, the federal numbers show modestly improving trend lines rather than strong gains.

For what it’s worth, the U.S. DOE says the formula used for this report isn’t as accurate as others – and, in fact, is being phased out and replaced by a more precise formula. Coverage from Gradebook and StateImpact Florida. Nationally, the rate reached its highest point in decades. Coverage from Los Angeles Times, Washington Post, Huffington Post.

Teacher pay raises. Gov. Rick Scott will seek them in his budget proposal, with an announcement set for today. Karen Aronowitz, president of United Teachers of Dade in Miami, tells the Tampa Bay Times, “Tell him to send the money, but no one is fooled by this. He’s just restoring money that was already stolen from teachers.” More from South Florida Sun Sentinel and News Service of Florida.

Teach for America. EdFly Blog: “Teach for America recruits bright, motivated university graduates and puts them in classrooms with low-income, disadvantaged kids. Normally, liberals would latch on to such a notion – think Peace Corps in urban neighborhoods.” But no.

Teacher evaluations. The new system is on the right track, but it needs more work to be meaningful, editorializes TCPalm.com.

Guts. Somehow, Florida’s decision to participate in PIRLS and other international assessments is being spun in some circles as a negative. The Quick and The Ed blog credits Florida for not shying away from what could be unflattering comparisons.

Tony Bennett. He’ll be in the spotlight this legislative session. Sunshine State News.

Charter schools. After two F’s in a row, Lee Charter Academy in Fort Myers will have to close. Fort Myers News Press.

Math. Pinellas is moving to an automated system that Superintendent Mike Grego says will better ensure that middle school students are placed in math classes that challenge them. Tampa Bay Times.

Superintendents. Broward’s Robert Runcie gets high marks from his board, reports the South Florida Sun Sentinel and Miami Herald. The candidates list for a new superintendent in Manatee is whittled to five, reports the Bradenton Herald.

School security. Two Palm Beach County schools hire police aides with their own budgets, reports the Palm Beach Post. The Sarasota school board isn’t sure what to do or how to pay for it, reports the Sarasota Herald Tribune. The Flagler school district is trying to get deputies into every elementary school, reports the Daytona Beach News Journal.

Religious angst. Proselytizing has no place in public schools, editorializes the Orlando Sentinel in the wake of stories about a Christian group distributing Bibles in Orange County high schools and atheist groups wanting equal treatment.

Closing schools angst. The Brevard school board delays a decision on whether to close four schools, reports Florida Today.