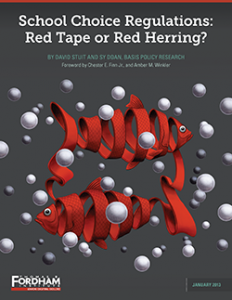 The Fordham Institute may be the closest thing to an honest academic broker in the contentious private school choice arena these days, and its latest report will no doubt enhance that reputation. “Red Tape or Red Herring?”, released today, provides strong evidence that private schools are not averse to academic or financial oversight – a finding that runs counter to a longstanding libertarian narrative.

As Fordham president Chester Finn Jr. acknowledged in the forward: “Many proponents of private school choice — both the voucher and tax credit scholarship versions — take for granted that schools won’t participate (or shouldn’t participate) if government asks too much of them, regulates their practices, requires them to reveal closely held information and — above all — demands that they be publicly accountable for student achievement.”

The report looks at the participation rate of private schools in voucher and tax credit scholarship programs in 11 states and surveys from 241 private schools that do and don’t participate, and it finds that testing requirements are not a significant deterrent. Only a quarter of the schools ranked state-required testing as a “very” or “extremely” important factor. Among the schools not participating in voucher or scholarship programs, testing was the fifth most-cited concern – behind such issues as protection of religious activities and admission processes and government paperwork.

This is not to suggest that private schools are eager to embrace more government regulation. The report did find a modest negative correlation between the degree of regulation in a state and the rate of schools participating. But the survey is a reality check on private schools and the educators who run them. Catholic schools remain a major player in the voucher-scholarship market, in part because their mission is to serve poor children, and they also demonstrate remarkable leadership on the issue of testing and academic accountability.

Low-income students who participate in the Florida Tax Credit Scholarship are required to take a nationally norm-referenced test approved by the state, and the test results are reported statewide each year. In preparation for a 2010 bill that extended the test reporting to individual schools with at least 30 scholarship students, and instituted an independent financial report for any school receiving more than $250,000 in scholarship funds, the state’s scholarship nonprofit, Step Up For Students, directly contacted 120 private schools with the largest scholarship enrollment. (Step Up co-hosts this blog.)

The results of this survey could not be described as scientific, since the schools were informed of broader program expansion and scholarship increases in the bill, and were encouraged to support it. But the numbers were head-turning nonetheless: 118 of the 120 schools voiced support. In other words, nearly every school most impacted by the new academic and fiscal requirements thought they were worth the tradeoff. One Christian school principal in Jacksonville was particularly eager, telling Step Up: “I’m all for accountability. This is going to separate us from the schools that are here just to take tuition.”

Fordham’s conclusions are appropriately measured, because part of the value that private schools bring to the modern mix of public education offerings is their independence – and too much regulation can undermine that. But one of Fordham’s most important contributions to the nation’s regulatory debate is its insistence that any school receiving public money, directly or indirectly, has an obligation to the public as well. A voucher or a scholarship can be a valuable tool for disadvantaged children, but the ability of their parents to change schools is only one of the ways those schools are held to account.

Testing is an appropriate gauge as well, and this new Fordham data suggests most private schools are not afraid of it.