Florida students ranked No. 4 among the 50 states last year in the percentage of high school graduates who passed a college-caliber Advanced Placement exam, according to a national report released Wednesday. 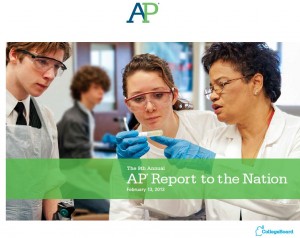 Over the past decade, the report also shows, Florida students ranked No. 2 in gains.

Administered by the nonprofit College Board, AP exams are tied to rigorous AP courses and widely considered to be good predictors of college success. Between 2002 and 2012, the percentage of Florida graduates who passed at least one rose from 14.4 percent to 27.3 percent. Over the same span, the national rate rose from 14.3 percent to 19.5 percent.

Florida’s AP success is among the most compelling signs that Florida’s once barrel-bottom public education system is progressing, particularly for low-income and minority students.

For years, AP classes were the near-exclusive domain of white and Asian students in the ‘burbs. But under former Gov. Jeb Bush, Florida began a sustained effort to give low-income and minority students more access. Higher expectations were coupled with better preparation for students, professional development for teachers and targeted investments in funding. Some districts, particularly Hillsborough, got even more radical, aiming to make AP the new normal in schools where AP courses could be counted on one hand.

The result at the state level: Florida outpaces wealthier, less diverse and – in the education realm – more highly regarded states like Virginia and Connecticut, and now trails only Maryland, New York and Massachusetts.