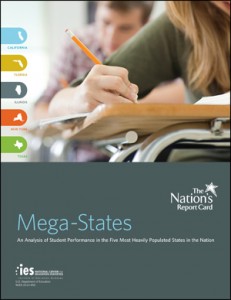 For the second time this week, a credible, independent analysis shows Florida students leading the pack in progress.

Between 1992 and 2011, Florida students made bigger gains than students in four other “mega states” in fourth- and eighth-grade reading and fourth-grade math, according to a report released Thursday by an arm of the U.S. Department of Education. In each case, they moved from below the national average to meeting or exceeding it. Low-income and minority students in particular showed traction.

“There is something real going on there,” said Jack Buckley, commissioner of the National Center for Education Statistics, according to Education Week.

The center’s comparison followed Wednesday’s College Board report that showed Florida continues to climb the charts on Advanced Placement exams. The Sunshine State now ranks fourth in the percentage of high school graduates passing AP exams. Over the past decade, it ranks second in progress.

Broken-record alert No. 1: Florida’s trend lines shouldn’t be a surprise, given reports like this, this, this, this and this in the past year alone. Yet there remains a lingering perception, cultivated by critics, that Florida’s public schools are sub par and stagnant.

For Thursday’s report, the center for the first time compared scores from Florida, California, Texas, New York and Illinois – the states with the biggest student populations and arguably the biggest challenges. It used results from the National Assessment of Educational Progress, a battery of tests better known as “The Nation’s Report Card” and considered the gold standard among standardized assessments.

In eighth-grade math, Florida students made gains but remain below the national average. Elsewhere in the report, they were singled out often.

Thursday’s coverage offered a taste of what would be a more interesting public debate if Florida’s progress was more widely acknowledged: what factors, or combination of factors, are fueling it? Buckley cautioned against giving too much credit to any specific policy. Tony Bennett, Florida’s new education commissioner, suggested higher standards, school grades and the third-grade retention policy played a role. Critics, if they concede progress, often credit the 2002 class-size amendment.

Parental school choice is clearly part of the mix. And I think it goes beyond charters and vouchers. Broken-record alert No. 2: 43 percent of Florida students now attend a school other than the one they’re zoned for. I don’t know how much or how fast that number has shifted over time, or how it compares to other states. But I suspect it’s grown a lot over the past 10 to 15 years, and that Florida is ahead of the curve.

I’m no researcher, and I know these things are complicated. But that’s a lot of increasing customization, and a lot of competition, that seem to coincide with a lot of improvement.