Washington: The new Charter School Commission is attracting candidates from across the state and beyond, including Liz Finne, a lawyer and director of the Center for Education Reform at the Washington Policy Center. The governor and other leaders expect to choose nine volunteers by March 6 (Associated Press). A coalition of educators and community groups filed a legal challenge that questions the constitutionality of Washington’s new charter schools law (Associated Press). More from Education Week.

Colorado: With more than 80,000 students enrolled in 190 charter schools, charter leaders try to clear up misconceptions about the school choice option (Reporter-Herald). Douglas County’s Choice Scholarship Program does not violate the  state Constitution, rules an appeals court. The outcome could have wide-ranging implications for whether vouchers  can be used statewide (Associated Press). 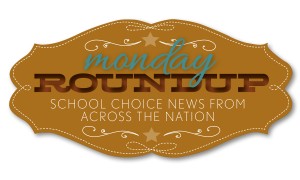 Alabama: Legislators approve tax credit scholarships for students attending failing public schools (Associated Press). More about the “legislative bombshell”  that Republicans called historic and Democrats said was a sleazy “bait and switch,” at AL.com. And the site offers a primer on the Alabama Accountability Act.

New Hampshire: The governor’s budget calls for repealing tax-credit vouchers and diverting some of those dollars to charter schools (Seacoastonline.com).
Illinois: Chicago Public Schools chief vows to get tough with privately-run charter schools, holding them accountable for poor academic performance (Chicago Tribune). Meanwhile, the Board of Education approves the renewal of 30 charter schools, including the UNO network under fire for funneling contracts paid for by state grants to relatives of UNO allies and a top executive (Chicago Sun-Times).
Iowa: Home-school proposals, including one that would allow parents who are home-schooling their child to teach other, unrelated children, are raising concerns. The measure would allow such parents to teach driver’s education, a move proponents say would help home-schoolers who often find it difficult to enroll in the course. But critics argue only specially-trained instructors, as state law requires, should be teaching students how to drive (RadioIowa).
New Jersey: Gov. Christie is making one more run at vouchers, calling for a modest $2 million pilot program that would award $10,000 vouchers to 200 low-income students in the state’s lowest-performing schools, giving them a chance to attend a public or private school outside their district (The Philadelphia Inquirer). A controversial  law that lets student athletes in choice programs participate on sports teams outside their district without being subject to transfer rules is sparking debate (MyCentralJersey.com).
New York: An editorial points to the city’s success with charter schools, despite disappointing outcomes in the movement overall, looking at a national study that shows, once again, the typical New York City charter school student learns more in a year in reading and math than his or her peers in neighborhood district schools (The New York Times). More on the study from the New York Post, with a sidenote that some of the city’s district schools show gains, too.
Pennsylvania: More Philadelphia district schools face conversions to renaissance charter schools, which must enroll students who live in the school boundary area. Education leaders call it the new model for sustaining neighborhood schools (Philadelphia Inquirer).

Tennessee: Struggling Memphis district school gets revamped by Aspire, one of the highest-performing charter schools in California where budget concerns threaten the future of charter schools (Commercial Appeal). Former mayor Willie Herenton says the school board is dragging its feet on a decision to allow him to turn two district schools into charter schools  (Commercial Appeal). And the sponsor of Gov. Haslam’s school voucher bill says it doesn’t go far enough. He wants more students eligible for the program (Nashville Public Radio). Meanwhile, the state chapter of American Federation for Children is spending $800,000 on a campaign to expand vouchers (The Tennessean).

Florida: Sen. Jeff Brandes is proposing a bill that would allow students to select courses on a class-by-class basis, taking school choice to a whole new level (redefinED).

Nebraska: The state’s education commissioner calls a bill to create charter schools flawed and unneccessary, saying the schools would be a step backward (Omaha World-Herald).

Massachusetts: The state puts Boston Renaissance Charter School on probation, saying it must improve academically or face closure. This isn’t the first time the school has struggled (The Boston Globe). Meanwhile, the state board of education approves three new charter schools and eight charter school expansions (Times-Union). A national study finds charter school students outperform their district school peers in reading and math (Education Week). And a shift in regulatory control may force a pioneering online school in Greenfield to shut down (The Republican).

Washington, D.C.: Rocketship Education gets a big thumbs up, with plans to open eight city charters, but school board leaders clamp down on some low-performing charters (The Washington Post).

Texas: Jeb Bush and son, George P. Bush, tell a group of business leaders they need to dismantle the “monopoly of public education” by expanding access to charter schools, embracing online learning and overhauling teacher evaluations (Associated Press). House Speaker Joe Straus warns the school voucher bill is not likely to pass, but Lt. Gov. David Dewhurst says he favors the measure being introduced as tax credit scholarships by Sen. Dan Patrick (The Dallas Morning News). And students across the state soon could have the option of enrolling in a virtual academy, one of only three schools in Texas to offer a free full-time public school curriculum with its own teaching staff online (Grapevine Courier).

Mississippi: African-American lawmaker and school choice proponent Peter Groff traveled from his home state of Colorado recently to talk with local Democrats about his experiences with charter schools (Clarion Ledger).

Wisconsin: More than a 120 private nonsectarian and religious schools plan to participate in the Milwaukee voucher program next school year (Milwaukee Public Radio).

Georgia: A House bill would expand the Tax Credit Scholarship Program from $50 million to $80 million, diverting millions of dollars in potential state revenue from the general fund, according to one report (Rome News-Tribune).

Louisiana: The state education superintendent wants to push a voucher-funding proposal that could sidestep a pending appeal to the state Supreme Court by allowing local school boards to indirectly pay private schools from the state’s annual allocation for public school students (Times-Picayune). More on the proposal, including talk about changing the way the program is financed at The Advocate. Gov. Jindal’s plan to let local nonprofits, public agencies and colleges authorize charter schools falls flat, with no one stepping up to take the job (Times-Picayune).

Maine: Governor revives school choice voucher debate, calling for a provision that gives low-income students the freedom to take taxpayer dollars with them to whatever school they choose, including private ones (Bangor Daily News).

Utah: Lawmakers are showing support for a bill that looks at establishing innovative charter schools with a focus on creating a military charter, and serving at-risk students and those seeking career and technical classes (Deseret News).