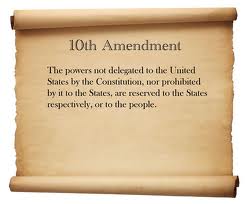 An expansive power of parents over their own children has been recognized by the U.S. Supreme Court since the 1926 decision in Pierce v. Society of Sisters. There, Oregon had attempted to make education in State schools compulsory; the court unanimously reaffirmed the independence and supremacy of the parent. This was guaranteed, it said, in the “due process” clause of the 14th Amendment. This rather mystical phrase – and similar potent, if obscure, clauses – have since been employed repeatedly to reaffirm the broad parental sovereignty. Even loving grandparents need parental permission to visit little Susie.

So parental authority has, in Pierce and its progeny, a certain protected status. Would it, nonetheless, be prudent and helpful – assuming the argument is plausible – for champions of parental authority to assert its reality as a source of law that exists quite independent of the Constitution, but is recognized and protected by it in the Bill of Rights?

Perhaps so. I will argue the institution of parenthood might be considerably more secure under the 10th Amendment than under the ever malleable “due process.” The court could be grateful for the relative clarity – and judicial restraint – that under the 10th would mark the boundary between the power of mother and the rights of Susie. Equally important, the child herself could claim this precious parental authority as a right of her own.

The primary example of this possibility could emerge in the effort to make parental school choice a reality for all families. The present economic compulsion experienced by modest and low-income parents to accept the free schools of The State as their mentor could well appear a violation of the child’s own right as well as an unjustified intrusion upon the parental authority which today, in practice, is reserved to our higher-income families. And sheer human dignity could come as a bonus for all.

Legal thought about parental school choice might then benefit from a new understanding of the sovereignty of parents and here I offer one for consideration. It would rest upon a jurisprudential premise which – if disputed – is very widely shared. Contemporary legal minds tend strongly to define law very simply as command plus force sufficient to secure habitual obedience to the commander’s rules and with no appeal to higher authority. Moderns typically locate such final power exclusively in formal government; in this country that means our 51 constitutionally born authorities – federal and state. I will call them The State. They do make law. But, do they constitute a monopoly?

Let us take this “positivist” definition of law-making seriously. It would then appear that, for over a quarter century, I made law. I wielded final authority to issue rules, adjudicate violations and impose penalties. During my children’s infancy (i.e. until the “age of emancipation”) their mother and I held unreviewable power to decide hours, diet, church, sports, the privilege to drive; we chose schools we expected to teach our ideas. Of course, children have “rights”; and, as parents we could not “abuse” them. Indeed, should we do so, The State would owe the child the duty to act in our place (“in loco parentis”).

The State, then, had only duties. The parents too had a few duties plus, however, the most expansive authority. The child had the duty to obey plus a sprinkling of rights to rescue by The State. Clearly this parental sovereignty is an empirical reality that fits the most up-to-date notion of lawmaking. Parents make rules and enforce them, as they alone decide.

So far as I can see, this extra-state authority to make law is unique to the status of parent. Some churches make “canon law,” but, it is enforceable only by moral pressure, not The State. The church cannot spank anybody except as agent of the parent. Native American tribes occasionally invoke the term “sovereignty,” but the reality is their general dependence on federal legislation. Some parts of international law have been said to derive authority from higher law antecedent to The State’s own free adoption, but little is heard of this today. The parent, it appears, is the only flourishing extra-state authority over the ordinary lives of particular persons – namely, their own children – whether natural or adopted.

Does the 10th Amendment have anything to say about this independent lawmaking reality? Maybe: consider the Ninth and 10th Amendments together:

Ninth: The enumeration in the Constitution, of certain rights, shall not be construed to deny or discourage others retained by the people.

10th: The powers not delegated to the United States by the Constitution, nor prohibited by it to the states, are reserved to the states respectively, or to the people.

The Ninth has been construed to protect various individual rights retained by “the people.” Indeed, prudent conservatives have worried the Supreme Court may use the IXth to invent all manner of new rights. They have a point.

The 10th is both different and similar. It speaks of “powers” retained by “the people,” and it distinguishes them from powers retained by the 50 states. The term “powers” is generally understood to refer to something quite different from “rights,” a difference the drafters obviously understood. Consider this modern dictionary definition:

… Dominance, control or influence over another … the ability … to alter, by an act of the will, the rights, duties, liabilities, or other legal relations either of that person or another.

If “the people” of the Ninth are also “the people” of the 10th, the kinds of individual powers that pre-existed 1791 and endure today would seem to be sheltered by constitutional recognition. And – as noted – the sole candidate for such a reserved power would be the parent. Only he or she – then and now – satisfies the accepted definition of lawmaker. As de Tocqueville put it in 1850:

“The father then does without opposition, exercise the domestic dictatorship which his sons’ weakness makes necessary … ”

Once we grasp that The State’s role consists of a duty as substitute parent, to rescue the child, conceptual difficulties diminish. The parent remains the general authority, but the child’s right does make certain commands and neglect forbidden; in such cases the parent and the State both bear important responsibilities. In the argot of contemporary law, The State has only duties, the child has only rights, and the parent has species of both plus the powers of his or her unique office. Put in terms of force and command, with the exception of children’s rights, the parent is law.

The State holds the common purse and in our society locates its “public” schools accordingly. In theory, it concedes the parents’ authority to choose the school; but often this can be exercised only by being wealthy enough to take up the desired residence. Beverly Hills High School is “public” to your children – if you can buy a house there. The State enhances the isolation of the suburb while beguiling its conscience with the misnomer “public.” Meanwhile, the sovereignty of the non-rich parent is simultaneously affirmed and frustrated; the parent is hailed, but the child conscripted. In effect The State revives for school choice the property qualification that once attached to the right to vote. The myth of the publicness of education, of course, runs deeper than the hot tubs of suburbia. The late Albert Shanker, more than once in my hearing, offered to represent the interest of the children – if only they’d pay union dues. Ironically, it is in fact the conscripted children of the poor whose compulsory assignment most reliably supported Albert and still confounds the mind of Diane Ravitch.

This reality may at last be faintly registering among middle class and teacher minds as an issue of justice. A glacial shift in perception may eventually extend the practicing parentocracy beyond the schools of Suburbia. In this epic project the courts might find their responsibility and capacity to identify the “reserved” power of the parent and allow its return as a coherent source of law.

The court might be grateful, first of all, for the clarity of the claim. Its acknowledgement of “the people” of the 10th would make plain the legal structure of the argument against forced assignment of the child to particular State schools. Nor are we here – as Pierce would have it – dealing solely with parental authority. Parental control of assignment to a particular school (public or not) can, at last, be clearly understood as a part of the “children’s rights” movement. Put more precisely, boys and girls have a 10th Amendment claim to school choice by their parent. What is sauce for the suburban goose is sauce for the gander – for the sons and daughters of the lower-income family. Such children are entitled to have the school’s version of the good life consistent with that of their own family. The equality implications are also evident. In the individual case this match of worldviews between parent and school may give us the middle-class shudders. But apart from cases of abuse, choice could now be clarified as the established legal complement of the parental authority with all its diversity and freedom of expression. If one despises such empowerment of the poor, he may join Plato in condemning the family itself as subversive of order. That will be the monopolists’ argument.

The parent will respond with all the practical reasons to expect that America’s extension of authority to ordinary people will have enormous long-run payoff in civic responsibility, the moral tenor of our culture and in the child’s own perception of family as a cool idea. “Due process” provides a much less perfect intellectual atmosphere in which to make the moral and civil consequences of choice an issue in the long struggle to empower in practice this specific adult to carry this responsibility.

Far from a State monopoly the deference to “the people” as the parentocracy lodges authority nearest those ordinarily able to exercise it effectively. Finally, for 10th’s contribution to human dignity, I can only imagine that world in which all parents are recognized as responsible lawgivers together with children encouraged to take pride as their admiring subjects. Here indeed, power becomes dignity – for every child and family, rich and poor.