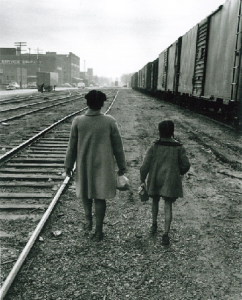 Bill Maxwell, a highly regarded African-American columnist with the Tampa Bay Times, has used a new Hechinger Report to argue that charter schools are introducing a second wave of “white flight” in public education. His argument tracks the work of the Civil Rights Project at UCLA, which has called charter schools a “civil rights failure” and echoes the assertion of University of Minnesota researcher Myron Orfield that charters are “an accelerant to the normal segregation of public schools.”

Some of these findings are certainly cause for concern. But racial integration in American education is rooted in nearly a half-century of social policy and federal court intervention, which makes isolated conclusions about the new role of charter schools problematic. Yes, it could be that charter schools cause more racial segregation. It is also possible something else could explain the racial demographics. It could be, for example, that charter school enrollment merely reflects the racial makeup of the neighborhoods in which they operate.

In that sense, examining the racial ratios in charter schools is but one part of a much larger equation.

Maxwell’s column was inspired by an article in the Hechinger Report that began with an anecdote about a very white elementary charter school south of St. Paul/Minneapolis, Minn. The charter school, Seven Hills Classical Academy, was 82 percent white while the surrounding Bloomington Public School District averaged 57 percent white.

However, the school district obscures the vast range within the public schools themselves. Among Bloomington public elementary schools alone, the ratio of white enrollment ranged from 15 percent to 81 percent. In other words, there are also public schools with similar degrees of racial segregation.

Those district schools reflect the racial makeup of the neighborhood. The same could be true of charter schools. The 2013 National Charter School Survey by CREDO reported that the average charter school enrollment is 35 percent white while the average public school enrollment was 52 percent white. One might conclude that charters were much more segregated. However, CREDO showed that the public school from which the student transferred was 40 percent white. Similar results were found in studies by RAND and by researchers at the University of Arkansas.

When you then correlate charter and district schools to the same neighborhoods, the racial demographics are similar. For example, Imagine Charter School in St. Petersburg was only 5 percent white but operated in a school zone that was 30 percent white. However, the largest groups of students attending Imagine were originally zoned to attend Lakewood, which, at 10 percent white, was very similar to the charter school.

The methodology has clear limitations, but the following chart tends to support an obvious conclusion – that charter school racial makeup tends to be similar to the makeup of the public school zone in which it is located. 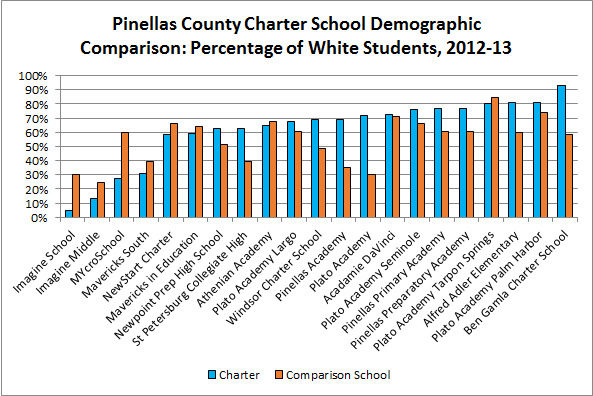 Also, it is hard to ignore the racial makeup of a subset of Pinellas district schools that are, just like charter schools, chosen by parents and not the result of zoned assignment. The average Pinellas charter school is 63 percent white; fairly close to the district-wide average. The average district-operated “fundamental school” is 73 percent white with a range from 52 percent to 86 percent.

This comparison between “fundamental” and charter school enrollment is not intended to criticize the district for creating choice schools that serve disproportionately white audiences, but it does serve to illustrate the complexities of school choice and race. In fact, Pinellas is a prime example of the challenges inherent in trying to provide integrated education. The district managed for nearly three decades to keep the percentage of black students in any single school under 30 percent under a strict federal desegregation court order. A decade after that order was lifted, 28 schools no longer meet that ratio, including a half-dozen that are more than 80 percent black.

Powerful historic, judicial and social forces are at play in the arena of race and education, which is why it is so important to use caution when drawing conclusions about how any single sector of public education is impacting racial integration. It is also hard to dismiss the fact that many of our nation’s charter schools were created with the expressed goal of erasing the achievement gap between races and that these schools tend to be all-black. We could deplore that as segregation, but it’s not the kind that forced Linda Brown to walk through rail yards in Topeka, Kansas, more than 60 years ago. Context matters.