Editor’s note: This is the third post in our series commemorating the 50th anniversary of Dr. King’s Dream speech.

It was January 18th, the Saturday of the MLK weekend in 1997, when I printed out the “I Have a Dream” speech. I’m not completely sure why, except that I was transitioning in my life from international business to education reform. The powerful language and ideas King conveyed, especially the notion that we had defaulted on our promissory note, captured me then and have stayed with me. The speech has been in my briefcase ever since. Multiple times each year, I pull it out when I need to refresh my memory as to why I remain engaged in what is often such an arduous struggle.

By now, I hope, people are familiar with the dismal stats. Our schools remain mostly separate and unequal. Schools that enroll 90 percent or more non-white students spend $733 less per pupil per year than schools that enroll 90 percent or more white students. That’s enough to pay the salary of 12 additional new teachers or nine veteran teachers in an average high-minority school with 600 students. Almost 40 percent of black and Hispanic students attend those high minority schools, whereas the average white student is in a school that’s 77 percent white. Whites now constitute only 52 percent of K-12 demographics. 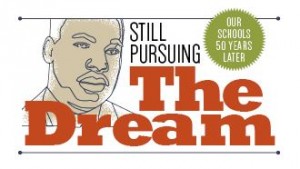 Meanwhile, only 19 percent of Hispanic 4th graders and 16 percent of black 4th graders scored proficient or above on the 2011 NAEP reading exam. About half of Hispanic and black students were “below basic,” the lowest category. Even our best students often leave the K-12 system unprepared, as best evidenced by a 60 percent remediation rate in the first year of college and large numbers of dropouts.

Although progress has been made, America remains in default on its promise of access to a high quality educational experience for all. In the words of Dr. King, we are addicted to the “tranquilizing drug of gradualism,” and mired in a “quicksand of racial (as well as class) injustice.” Powerful adult interest groups continue to benefit. That part is analogous to the civil rights struggle of the 50’s and 60’s, though thankfully so far without the snarling dogs, fire hoses and bullets. My frustration with the pace is that the vision of justice, of what is right and what is possible, is so clear. We see hundreds of charter schools, private schools and traditional public schools achieving at high levels with children of all classes and ethnicities. When we know better, as we do, we should do better. But mostly we do not.

Parental school choice alone is no panacea. Standards need to be raised; teacher recruitment, preparation, training, evaluation, and compensation systems dramatically restructured; and technology integrated to improve efficiency. But Dr. King would likely look askance at using school district attendance boundaries to corral families the way we do cattle, allowing them in and out only when it pleases the owner. This system is inherently unjust, immoral, and even evil when it condemns families to poor performing schools year after year, generation after generation. It forcibly segregates us from one another. Without choice, we de facto have Plessy v. Ferguson’s “separate, but equal” that has never actually been equal. Often it destroys hope.

Long ago our society banned the kind of discrimination that says “you live there or look like that, so you can’t live here, can’t work here, can’t eat here, can’t stay here tonight.” But by clinging to a state monopoly and slicing and dicing our communities into multitudes of school districts and attendance boundaries, we still allow people – no, worse, we allow the government –  to say “you can’t go to school here.” Why are we all right with this?

I do not know how to desegregate completely our schools or how concerned to be about it. But empowering parents with the ability to access the widest possible range of schools is surely an effective palliative. Some are critical of the charter movement because the schools are predisposed to be in inner cities, drawing their enrollment almost exclusively from the surrounding high minority neighborhoods. I see value in diversity and in encouraging all schools to recruit broadly. But in the end, I would trade a high quality school with low integration – but voluntarily selected by its families from an array of schools – for one where a stranger in a school district office forced enrollment because the families could not access any other school. More often than not, those latter schools have not delivered academically for most children. I have faith a quality education will encourage diversity and exploration in a child’s life.

Becoming “free at last” may always be a work in progress, but surely the next urgent “bend in that long arc of the moral universe toward justice” must be towards supporting all parents to access schools that best serve their children. I’m confident this would honor Dr. King’s dream.

Coming tomorrow: A post from Dr. Vernard Gant, director of Urban School Services with the Association of Christian Schools International.