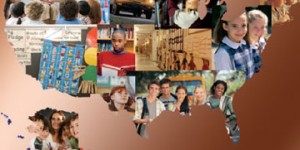 Every year the National Center for Education Statistics (NCES) releases its School and Staffing Survey, a treasure mine of interesting education tidbits for education data geeks.

According to the latest (collected from 14,000 schools during the 2011-12 school year), 64 percent of private school 12th graders will go on to a 4-year college or university but only 39.5 percent of traditional public school students and 37.2 percent of charter school students will do the same.

But don’t get too excited. Some caution is needed before making a conclusion about the impact of these schools because there are big differences regarding students and teachers at these schools. For example, private schools are much whiter and more affluent than public schools. That might explain some of the 25 percentage point advantage in college enrollment rates.

But if being whiter and more affluent helps private schools, it doesn’t seem to do much for traditional public schools when compared to charter schools.

District schools are whiter and slightly more affluent than charters, and their teachers are significantly better paid. Yet district 12th graders have just a 2.3 point advantage over charter 12th graders on attending college.

In other words, the 2.3 point college attendance advantage for district schools might be due to the fact that charters are more racially diverse and have higher concentrations of poverty. The numbers may also suggest that charter schools as a whole aren’t discouraging disadvantaged students from enrolling, and, as a recent study found, aren’t likely to be pushing students out either.

Table: Percentage of students and teachers by school type.

Here are some other interesting tidbits that may illuminate differences between the two sectors:

The average district teacher will work about one week less than a charter school teacher over the course of a year, but will earn $8,900 (20 percent) more. And don’t think the pay differential is due to significantly larger class sizes. District class sizes are likely to be 4 percent smaller than charters in primary school and 9 percent larger (2 students) in high school.

The survey data alone can’t tell us whether charter schools or district schools perform better. But it’s still fun poking in the data and exploring the differences.