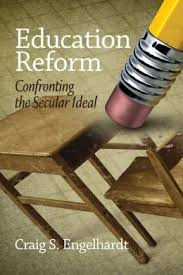 If one wishes a profound historical-dialectical account of the fate of religion in our governmental schools – all in 200 pages – make Craig S. Engelhardt’s new book, “Education Reform: Confronting the Secular Ideal,” your primer.

Engelhardt’s guiding principle is constant and plain: If society wants schools that nourish moral responsibility, it needs a shared premise concerning the source and ground of that responsibility; and this source must stand outside of, and sovereign to, the individual. Duty is not a personal preference; if it is real, that is because it has been instantiated by an authority external to the person. In contemporary theory, the source of such an authentic personal responsibility is often identified in ways comfortable to the secular mind. There is Kant; there is Rawls.

But in the end, the categorical imperative and the notion of an original human bargain are vaporous. We go on inventing these foundations, but, in moments of moral crisis, such devices do not provide that essential, challenging, universal insight that tells each of us he ought to put justice ahead of his own project. Only a recognition of God’s authority and beneficence can, in the end, ground our grasp of moral responsibility.

This message is repeated at every turn to support the author’s practical and political conviction – that the child cannot mature morally in a pedagogical framework that deliberately evades its own justification. Engelhardt shows in a convincing way that the religious premise was originally at the heart of the public school movement. Americans embraced the government school for a century precisely on the condition that it gave expression to a religious foundation of the good life. When modernism and the Supreme Court gave religion the quietus in public schools, the system serially invented substitutes including “character education,” “progressivism” and “values clarification” – each of which in its way assumed but never identified a grounding source. The result: a drifting and intellectual do-it-yourself moral atmosphere – an invitation to the student to invent his own good. And all too many have accepted.

Engelhardt gives fair treatment to all players in the public school morality game. From the start he provides a generous hearing to the century-and-a-half of well-intending and intelligent minds who paradoxically frustrated their own mission of a religious democracy, first by shortchanging the unpromising Catholic immigrant, then – step by step – pulling the rug from under that transcendental dimension of education which alone could serve their wholesome purpose of training democrats. In this book, every historical player gets to give an accounting of the good he or she intended and the arguments thought to support it; of course, the rebuttals by Engelhardt are potent and even fun to read.

My first and less basic criticism of the book is its slapdash attention to the legal paraphernalia that will be necessary to school choice, if it is to serve the families who now enjoy it the least.

Engelhardt makes only a brief pass at describing his ideal of a voucher system. He wants to protect the identity and authority of private schools while serving all families fairly, but seems unaware of the many existing and very specific models that address this real question and strive for a balance. This, I suppose, is my opportunity to commend and recommend the expertise of my hosts in this blog, the American Center for School Choice and its partner Step Up For Students. In this business, one eventually has to become very specific about both creating and limiting opportunities for choice.

My second criticism is substantive. The author’s tight focus is on the specific role of religion in training good Americans. It asserts this goal will be achieved by assuring subsidized choice to parents of privately owned and operated schools. Its profound hope for America simply assumes that parents are the right and proper authority to decide such matters for the child. I accept this; but to leave that assumption so little analyzed seems both an invitation to the enemies of choice and an opportunity missed. There is a literature justifying the superiority of parental authority that goes far beyond the “due process” squibs of Pierce v. Society of Sisters. That Supreme Court decision suffices to guarantee the survival of religious schools but – like this book – never addresses the substance of the claim that parental empowerment is the best hope for producing the ideal citizen – whether the parent chooses a religious or an atheist school.

For the child to experience the love, responsibility and hope of the empowered parent is, some of us say, the wellspring of the child’s own aspiration for family and for something higher than self-satisfaction. But this conviction holds regardless of the school chosen. And that broader claim deserves notice. In fact, I think Engelhardt believes it but weakens the insight by the implication that most parents will save the day by choosing the religious school.

Now, if parental sovereignty were to be recognized as a discrete source of effective moral learning at school, there could be a logical problem with Engelhardt’s religious argument for choice. At least in theory, the superior outcomes he attributes to faith-based education could be simply  – or at least partly – a function of the exercise of parental choice quite apart from the chosen school’s message about the source of the good. And how could one argue empirically for religion as the true cause of civic devotion when religious schools today are in fact all parentally chosen? Is it not possible that those non-religious schools that also get chosen are equally effective at producing good citizens?

The relatively few secular schools in the private sector seem to graduate their share of caring types. Meanwhile, even more confounding, in the public sector, the “civic gap” between pupils of inner-city and (chosen) suburban schools is all too evident. I strongly favor choice of faith-based schools, but our supporting policy arguments need to broaden. They must allow, and even emphasize, the real possibility that parental choice itself is the master principle. Parents with no interest in religion – and those schools that they would choose – merit recruitment for this crucial opportunity for the common good.

But, enough; this book deserves a positive send off. It will be a strong influence for good.