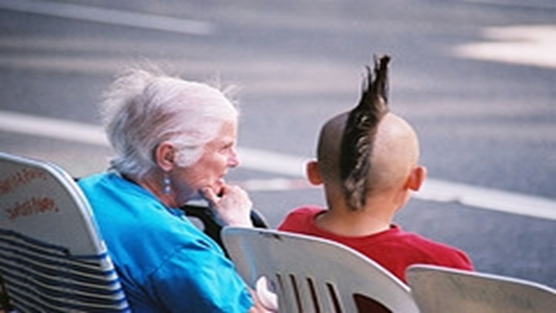 How much concern should the citizens of Florida have for the unprecedented change in store for the state’s age demographics? The chart below displays projected increase in youth and elderly populations by state, focusing on the top 10 states for youth population growth. Keep in mind these are increases, not totals. 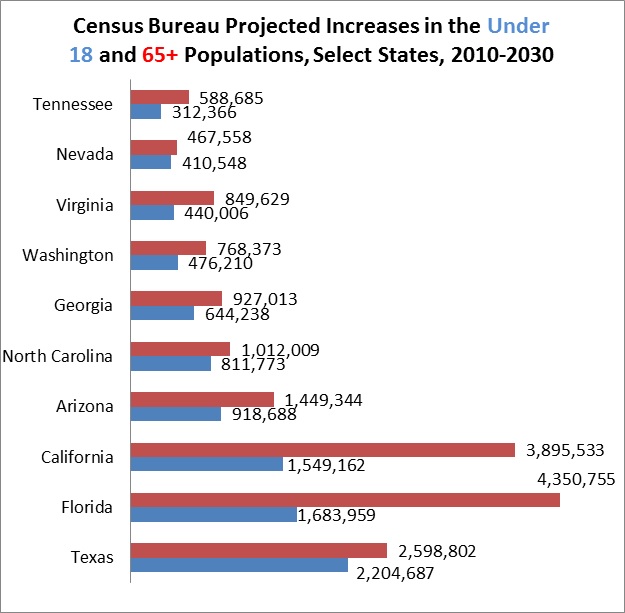 Some of the smallest columns on the above charts should inspire the most fear. Nevada, for instance, has about 400,000 students in its public school system at the moment. Good luck with that. I’m sure the eyes of Floridians have already been drawn to what will appear to them as the most frightening column on the page – a 4.35 million increase in the elderly population. Notice that fellow mega-states California and Texas not only have smaller increases, but also start with much larger populations with which to attempt to wrestle with these problems.

Don’t get entirely distracted with the increase in the elderly population because it is only part of Florida’s challenge. As discussed in earlier posts, the percentage of the population that is working-age is set to shrink in all 50 states, and Florida has the problem in spades. This foretells a fierce, looming battle over scarce public dollars for health care and K-12. 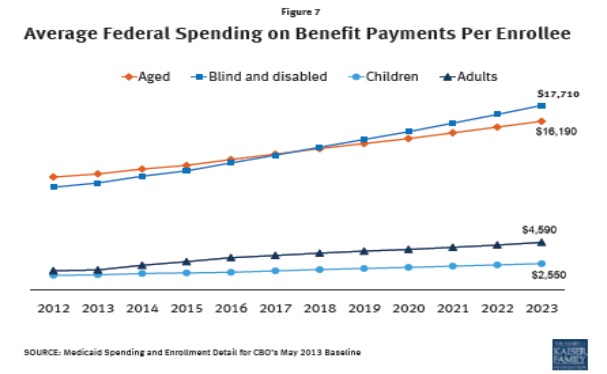 Medicaid operates on the basis of matching funds – states put up funds, and the federal government matches them. So while the chart notes the federal cost per enrollee, the state is also on the hook. For purposes of our current discussion, we need to recognize that both the youth and the elderly population increases in the first figure will be increasing the demand on Florida’s Medicaid system. Currently, Medicaid serves far more children than the elderly, but states spend more total dollars on the elderly.

Notice the Kaiser Family Foundation forecasts an increasing cost per recipient in the years ahead. The Census data tells us the number of eligible recipients will be vastly increasing as well, and Florida looks to have the largest increase in the most-costly recipients in the nation. In addition, Florida has a large increase in eligible youth recipients on the way and one of the smallest proportions of working-age people of any state in the nation to pay the costs.

This leads us to a discussion of K-12. Florida looks to have something on the order of an additional 1.4 million K-12-aged students by 2030, to go along with the unprecedented increase in the size of the elderly population.

Let’s start with the basics. Where is Florida going to put an additional 1.4 million students? The data below shows the capital and debt interest cost per-student in the public school system circa 2008. 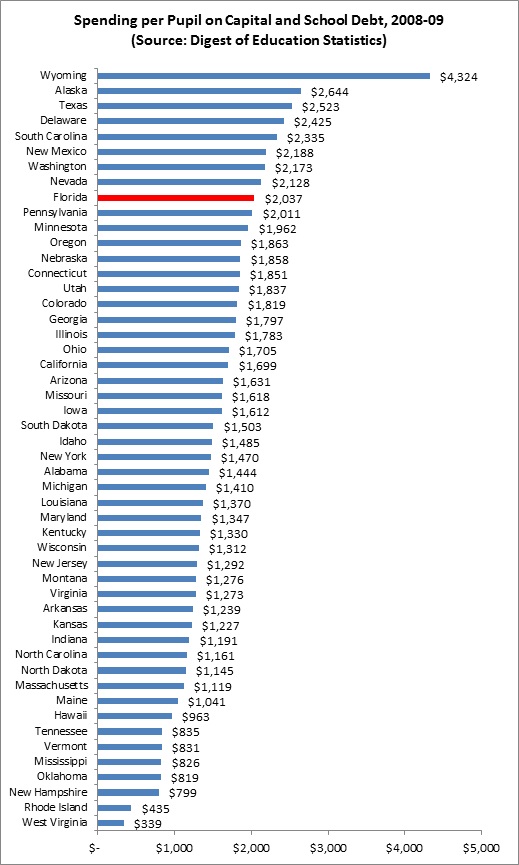 Wyoming, Alaska and Texas spend the most per-pupil on capital and debt, but all three states have been flush with oil and gas money in recent years. Texas, at least, has the excuse of a rapidly growing K-12 population. Florida spent about 20 percent of its total spending per-pupil on capital and debt in 2008-09. Note also that the amount spent to house students stood somewhere around the same cost needed to enroll a young person in Medicaid for a year.

Previous expenditures on school buildings will not suffice for the needs of the future with far more students on the way. With the percentage of Florida’s population that is working-age forecast to decline, and the needs for health care spending slated to increase substantially, Florida’s non-health-care budget looks to face unprecedented pressures ahead.

Florida has had a growing student population for a long time, but it will be facing challenges of a whole new scale with the working-age portion of the population shrinking. The traditional way of dealing with enrollment growth involved building new district facilities, like this one:

This is a lovely building, but it cost $109 million to construct as a part of an overall $1 billion spent by Broward County on construction projects between 2004 and 2009. West Broward High School boasts an 8 out of 10 rating on Greatschools.net, so bully for them. With a 2,700-student capacity, however, it would take approximately 519 new schools with the space of West Broward High if our aspiration is to have school districts absorb all of the population increase on their own. The facility costs alone (keep in mind that capital and interest costs are only a fraction of the total cost of educating a child) would run into the tens of billions of dollars.

Those tens of billions of dollars will be in short supply due to soaring health care needs. If Florida’s policymakers and educators were to attempt to stay the course into this approaching storm, the outcome is already decided: total inflation-adjusted spending per-pupil will likely decline, possibly substantially. Moreover, the percentage of what remains going to capital and interest on debt would soar from the current 20 percent. You could find the funds available to pay the public school system’s teachers and principals placed into a very cruel vice.

Older voters, it is worth mentioning at this point, have a reputation for being a hard sell in school district bond elections. Having a much higher percentage of them in your electorate may not bode well for the building of hundreds of new West Broward High Schools even if it were a realistic option.

You might still be hoping that some fantastic spurt of economic growth will suddenly appear to somehow make all of this affordable. Alas, the Congressional Budget Office forecasts below average economic growth for the United States in large part because of (you guessed it) an aging population. The chances that the state at the vanguard of the aging-population trend will somehow grow like mad seem remote at best.

All of this leads to a single inevitable conclusion: Floridians must reformat the entirety of their social welfare state to accommodate the 21st Century demographic change. I have chosen the word must deliberately, as the status-quo simply does not represent a viable option. In the K-12 space, this means you have an urgent need to increase both the effectiveness and the cost-effectiveness of the education system. 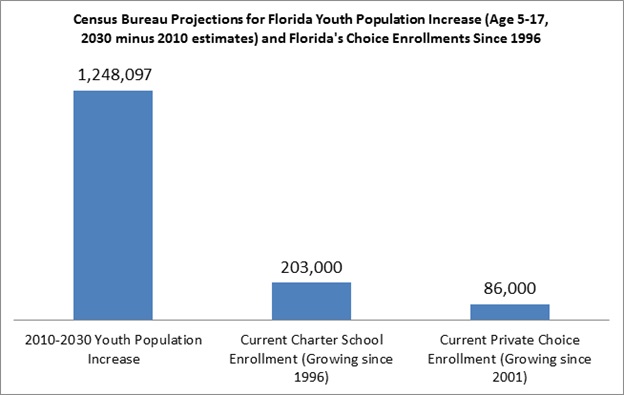 Sadly, there will be no silver-bullet solution to these problems. It is going to be rough sailing. Note, however, that Florida has been successfully experimenting with programs that educate children with limited to no facility costs incurred. As currently constituted, however, these programs will prove far too modest to make a meaningful impact on problems of this scale. If districts are hard pressed to build tens of billions of dollars worth of new facilities with public dollars, it seems beyond optimistic to believe private philanthropy will provide tens of billions of dollars in new charter school facilities.

Next, the state should embrace and encourage alternative visions of K-12 education. The public education system needs all the help it can get. Let’s assume that some percentage of parents and students would embrace the opportunity to provide a non-traditional education for their child at a large fraction of the current cost to attend a district or charter school. Parents could enjoy the freedom to customize an education for their child, making use of private tutors, community colleges, universities, virtual education programs, physical therapists, etc. The state enjoys a savings and relieves the pressure on the public school system to construct new facilities.

Florida’s existing choice programs demonstrate conclusively that there is no need to fear a mad rush to the exits of the public school system. Well over a decade after the McKay Scholarship program went statewide, only six percent of eligible students today participate. The public schools enroll more students eligible for the program (children with disabilities) today than when the program went statewide. Florida public schools spend more, employ more people and (not coincidentally to the creation of the McKay Scholarship Program) do a profoundly better job educating the vast majority of eligible students they retain. This is a powerfully beneficial policy innovation, as it comes at only the negligible cost of the state redirecting a portion of existing spending.

Some may object that a program with multiple uses for funds might grow faster than the McKay Scholarship Program. For your sake, Floridians, I hope this is in fact the case, as it is exactly what Florida needs to help face the challenge of the future. Alternatively, you can continue with the status quo until it breaks, worsening what looks to be a terrible intergenerational battle over scarce public resources.