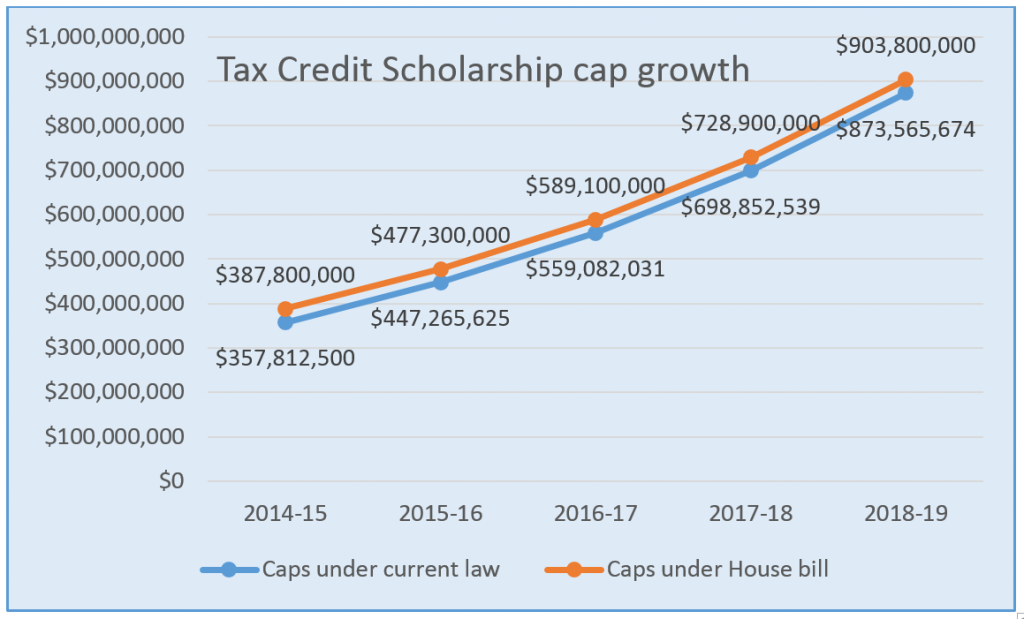 A House committee this morning released a new version of a bill that would expand Tax Credit Scholarships for low-income children in Florida and, given some of the outsized claims about its impact, it’s worth reviewing the bill’s actual targets for growth.

The truth is, there is less there than meets the eye.

The scholarship program has a cap that limits the tax credits and, by extension, the number of disadvantaged students who can be served. And the degree to which the bill actually increases that cap has become something of a rhetorical sport for opponents and, in some cases, even the media.

This year, 59,765 students are using the school choice scholarship in 1,425 private schools. Various accounts have described the bill as doubling that enrollment, with one today suggesting the bill would add 50,000 new students. In committee, one state representative dismissed it as “too much, too fast.” A Gainesville Sun column even branded it as “the largest expansion of private religious school vouchers in state history,” adding, “they’re sticking taxpayers with the $2 billion dollar tab.”

Given that I am the policy director of the nonprofit, Step Up For Students, that supports this expansion (and co-hosts this blog), readers are entitled to take anything I say with some measure of skepticism. But here is the simple truth: The bill increases the current cap by $30 million, which represents a growth of 8.3 percent in the first year and 3.5 percent in the fifth year. It would allow for an additional 5,745 students in the fall, a number that would actually shrink over the five years because the $30 million is constant.

Here is how the current law works: The program is financed by corporate contributions that receive a dollar-for-dollar state tax credit, and the total amount of tax credits is established in law. This year, the cap is $286.2 million. If scholarship organizations raise at least 90 percent of the cap in any given year, then it increases automatically by 25 percent in the following year. Otherwise it remains exactly the same.

The bill tracks that 25 percent multiplier for the next five years and puts a $30 million bonus on top. This fall, for example, the cap under current law is increasing to $357.8 million. In the bill, it would increase instead to $387.8 million. That scenario is the same for each of the following four years, and, just like current law, the bonus growth is also tied to whether 90 percent of the cap is met in the prior year. If the 90 percent threshold is not met, there is no growth in the cap and no $30 million bonus.

For some of those who disagree that underprivileged children deserve this learning option, the current debate has indeed opened their eyes to the growth that is possible under current law. Assuming enough corporations were willing to contribute and enough parents continue choosing the option for their children, the scholarship could in fact double its enrollment in the next four or five years. I view this as a worthy clause in the current law, especially since 30,000 students were turned away this year and the scholarship is the only choice program with a statewide cap at all.

That said, the question at hand is whether to pass a bill that will be heard in the House Education Appropriations Committee on Friday. And that bill would allow 5,475 more of Florida’s 2.7 million students to exercise the scholarship choice this fall.