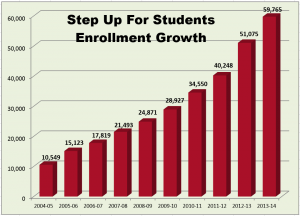 A Florida House committee debate this morning about a new Tax Credit Scholarship bill included some fair questions, obvious skepticism and dueling numbers about how many students want in. One reason for the confusion might be this little-known fact: Step Up For Students, the nonprofit that processes the applications, has stopped keeping waiting lists.

That may sound like an alarming development, but the reason is not what you might think. The people who process applications at Step Up, which publishes this blog, have become so overwhelmed in recent years that they no longer wanted to give low-income families false hope. They concluded that the main reason for the waiting list was mostly for show, and they wanted no part of that.

So when we are asked by lawmakers or reporters or state officials about a waiting list, we try our best to respond by describing the accelerated pace of applications. That trend is clear.

In 2012-13, the cap limit of $229 million allowed Step Up to serve 51,075 students. That year, it was receiving so many applications that it shut off newcomers beginning on Aug. 3, a couple of weeks before school started. And it’s worth noting here that scholarship parents are no different than the adults who are being asked to get health insurance under the Affordable Care Act: they often wait until the last minute. Even so, 87,540 students had already started an application.

For the current school year, 2013-14, the cap limit of $286 million has allowed Step Up to serve 59,765 low-income students. But applications were coming in so fast last spring that the processing team decided to stop taking them on June 28, about as month-and-a-half before school started. Even so, 94,104 students had already started.

That number from June is  the origin of the 34,000 “waiting list” that has been asserted many times during the current debate. In reality, it’s not a waiting list, but it’s a powerful indication of demand.

A more compelling gauge, though, may be the applications that are being received right now. A new school year starts in less than five months, applications are in full swing, and the current cap limit of $358 million should allow Step Up to serve about 68,000 students. As of today, 79,915 students have already started an application. So unless there is a precipitous drop in applications, Step Up will shut it down early again – maybe earlier than last year – so as not to create false hope among those who waited too long.

This trend suggests that tens of thousands of students will again be shut out.

The extreme skeptics will question whether Step Up is reporting these numbers faithfully and accurately. But one outside check is enrollment itself. The state Department of Education verifies and reports student enrollment in every quarter and year-end, and the chart attached to this post is pointed distinctly upward. It shows that enrollment is increasing precisely as fast as the caps allow, which is an independent source of data that reinforces what Step Up is reporting in applications.