School choice will soon be the new normal. According to Education Next’s latest annual poll, 1 in 4  families with school-age children have tried alternatives to district schools such as home schools, charter schools or private schools. Interestingly, 28 percent of public school teachers have tried such alternatives, with 19 percent – 5 points higher than the general public – sending their kids to private schools. 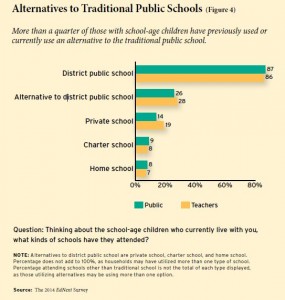 “School choice is no longer an abstract concept,” write researchers Michael Henderson, Paul Peterson and Martin West. “It is part and parcel of the American educational fabric directly affecting 26% of all Americans living with school-age children.”

The 2014 poll has plenty of other interesting findings, including continuation of several trends observed in last year’s poll.

Public support for vouchers for low-income children continues to fall, dropping from 41 to 37 percent while opposition increased from 45 to 51 percent.

Other findings remain the same. For example, American continue to believe teachers should be paid more and public school spending should increase. But this doesn’t hold true once respondents are notified of average teacher salaries and per-pupil spending amounts. Support for increasing teacher pay drops 17 points while support for increasing per-pupil spending takes a 25 point plunge once respondents are informed of the true costs of each.

Other nuggets worth mentioning: Teachers would rather see themselves paid more than invest in class size reduction once they know the true cost of the latter. The general public also agrees that increasing teacher pay is preferable to class size reductions once they are aware of the actual costs.

Teachers and tenure:  The general public gives 1 of every 5 teachers a “D” or “F” grade while teachers feel a bit more generous, grading 1 of 10 teachers with a “D” or “F.” Of course, far fewer than 10 percent of teachers are relieved of their jobs for poor performance.

The researchers used this finding to segue into the hot topic of tenure. Researchers found 50 percent of the general public opposed teacher tenure while 32 percent favored it. Furthermore, 60 percent of the public liked the idea of tying tenure to teacher performance. Only 9 percent of the general public that indicated it liked tenure also opposed using student test data to determine it. Among teachers, 60 percent favored tenure and only 31 percent liked tying it to student achievement.

Funny fun fact: Public support for Common Core fell from 65 percent to 53 percent between 2013 and 2014, but the concept still enjoys 68 percent support so long as the words “Common Core” aren’t used to describe it. Sounds like Common Core advocates should have run the name past a few focus-groups.

There are plenty of other neat findings in this year’s poll, so take a peek for yourself.