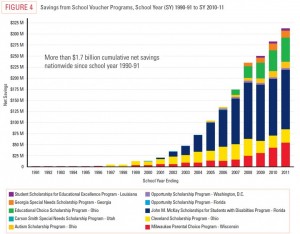 Private school vouchers have saved taxpayers more than $1.7 billion since 1990, with nearly half of that coming from Florida’s McKay Scholarship for students with disabilities, according to a new report by the Friedman Foundation for Educational Choice.

The School Voucher Audit by Jeff Spalding, former CFO of the City of Indianapolis, takes a sophisticated look at the fiscal impact of vouchers, considering multiple revenue sources, fixed and variable costs and policy design. It examines 10 programs that have served a total of 505,000 students from 1990-2011.

The bulk of the savings, $1.3 billion, have occurred since 2007. Excluded from this report are savings from tax credit scholarships, individual tax credits or deductions, or education savings account programs.

Florida programs had the biggest and smallest savings. The short-lived Opportunity Scholarship program, struck down in 2006 by the Florida Supreme Court, saved the state $2.9 million, while the McKay scholarship program has saved the state $836 million. The nation’s oldest voucher program, Milwaukee’s Parental Choice Program, has saved Wisconsin $238 million since 1990.

To calculate the savings generated by voucher programs, Spalding took into account the policy design of the voucher and the different ways in which education is funded. He also made adjustments for fixed and variable costs associated with public education.

Variable costs, such as teachers and classroom supplies, can be adjusted as enrollment rises or fall. Fixed costs, such as school buildings, cannot be changed in the short-term. Both have the potential to reduce the savings from vouchers. For example, a school of 50 students may easily afford two classrooms (and all the associated expenses) with 25 students each. If enrollment falls to 30 students, the school can eliminate a classroom (reducing the teaching staff by one and the class supplies in proportion to the new student population) and remain financially viable. If a school has 40 students, it can also reduce classroom supply expenditures proportionally to the drop in student population, but it may find it still needs two teachers.  In this last instance, the variable cost of the teacher remains even as revenue drops.

Policy design can also reduce savings. For example, some programs allow current private school students to receive vouchers. Despite a mandate to provide a free public education, states do not budget for students not enrolled in public schools. These students are, as far as the state’s budget is concerned, “free” so long as they remain in private schools. If the “free” private school student is allowed to use a voucher, they are calculated as a new cost.

According to Spalding, private school enrollment has fallen from 12.7 percent of the student population in 1985 to around 10 percent by 2010. This move of previously “free” private school students into public schools required states to spend as much as $220 billion more on education during that 25-year period. Had at least half of the students remained enrolled in private schools with a voucher, taxpayers would have saved more than $100 billion. Unfortunately, this calculation is often missing from public policy debates on school choice.

Even when factoring in the complexities of education budgeting, vouchers today average a savings of $3,400 per student. Although the savings are generally not returned to taxpayers, they are often rolled back into public schools, or even spent on other programs such as public safety, social services, or health care.

The Friedman report provides a breakdown of the costs and savings of each program and provides a more detailed explanation of the methodology. Read the full report here.

Full disclosure: Patrick Gibbons is a research fellow with the Friedman Foundation, and Step Up For Students, which co-hosts this blog, is a recipient of a grant from the foundation that helps support operations related to administering the new Personal Learning Scholarships Accounts program.