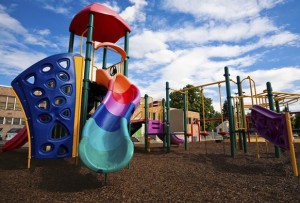 With a little help from some recycled rubber, groups seeking a review of state Blaine Amendments may have a better shot at clearing a major hurdle: Getting a hearing from the U.S. Supreme Court.

Recycled rubber can be converted into soft, non-toxic playground mulch. The state of Missouri offers grants to schools and non-profits so they can use it to build safer playgrounds.

But does the public benefit of safer playgrounds suddenly take on a sectarian purpose if a grant is given to a religious school?

The 8th U.S. Circuit Court of Appeals thought so when it upheld Missouri’s rejection of Trinity Lutheran Church’s grant application for a preschool playground.

Blaine Amendments, a relic of anti-Catholic bigotry present in some 37 state constitutions, are already being used to deny publicly supported educational benefits to students choosing religious private schools, and are frequently cited in cases challenging school choice programs. The denial of recycled rubber playground material may just demonstrate how odd the interpretation of these amendments has become.

How far can states take these restrictions? If a grant for recycled rubber is prohibited, why is public assistance to religious affiliated hospitals or charities still acceptable? If free bus transportation is prohibited, why isn’t publicly subsidized metro transit for students attending religious private schools?

School choice advocates, along with lawyers for Trinity Lutheran Church, are now asking the Supreme Court for clarification on the contradictory rulings at state supreme courts and federal circuit courts.

Michael Bindas, an attorney with the Institute for Justice who represents voucher parents in the Colorado case, argues the government is supposed to be neutral with respect to religion. In a recent Wall Street Journal column, he argued Blaine Amendments discriminate against those who choose religious options.

“By hearing the appeals, the court will have a chance to resolve the lingering conflict between the Constitution’s command of neutrality toward religion and the vestiges of anti-Catholicism that still haunt the constitutions of so many states,” he wrote.