A century ago, three Catholic sisters in St. Augustine, Fla. were arrested for something the state Legislature had recently made a crime: Teaching black children at what, in the parlance of the time, was known as a “negro school.”

The ensuing trial propelled a 266-year-old French Catholic order and America’s youngest Catholic Bishop into the middle one of the wildest and most racially charged gubernatorial campaigns in Florida history. A hundred years ago today, the white sisters won their legal battle, vindicating the rights of private institutions like the Saint  Benedict the Moor School that fought to create educational opportunities for black children in the era of Jim Crow segregation.

Black parents’ demand for quality education didn’t begin with Brown v. Board, but hundreds of years before, in chains and in secret. But near the turn of the twentieth century, as Jim Crow laws reversed the progress made under post-Civil War reconstruction, public institutions intended to uplift freed blacks became increasingly inadequate and unequal. Black parents often turned to their own churches or to missionary aid societies, like the Sisters of St. Joseph, to educate their children.

The story of the three white Catholic sisters has been examined over the years by multiple scholars, whose work informs this post. And while details in the historical record are at times murky and ambiguous, the episode sheds light on the countless struggles across the South to educate black children who were pushed to the margins by oppressive public institutions. 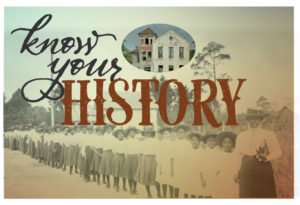 Founded in 1650 in Le Puy-en-Velay, a rural mountain town in southern France, the Sisters of St. Joseph took up a mission to serve, educate and care for the poor and disadvantaged. For the next 200 years, the sisters pursued their mission throughout France until they were invited to Florida by Bishop Augustin Verot after the end of the U.S. Civil War.

Verot, a native of Le Puy, recruited eight sisters for a new mission: To educate newly freed slaves and their children.

The sisters established Florida’s first Catholic school for black students in 1867 along St. George Street in St. Augustine. They would go on to establish schools in Key West and in Ybor City. With the financial backing of a wealthy heiress, Saint Katharine Drexel, the Sisters of St. Joseph opened St. Benedict the Moor School in 1898.

The Sisters of St. Joseph, along with other religious groups like the Protestant American Missionary Association, educated black students in private and public schools in Florida for several decades. But then the legislature lashed out against their efforts. “An Act Prohibiting White Persons from Teaching Negroes in Negro Schools” unanimously passed through both chambers without debate, and was signed into law on June 7, 1913.

At the time, the Sisters of St. Joseph, Sisters of the Holy Names, and other Catholic orders operated schools for black children throughout the state. According to historian Barbara Mattick, St. Joseph’s school in Pensacola educated 190 students; St. John the Evangelist in Warrington had 34; St. Francis Xavier School in Key West, had 95; St. Benedict the Moor, in Ybor City, educated 125 students; St. Peter Claver in Fernandina had 29; St. Peter Claver in Tampa had 125; St. Benedict the Moor in St. Augustine taught 65.

Cockrell believed the law to be unconstitutional. “This discrimination, in my opinion, makes the act void,” he wrote. He advised the bishop to ignore the law and continue teaching black children, or to establish a test case and challenge the constitutionality of the law.

Kenny died in October of 1913, but his successor, 34-year old Bishop Michael Joseph Curley, followed Cockrell’s advice. When authorities asked Curley to remove white teachers from black schools, he refused, and vowed to fight the law all the way to the Supreme Court.

The Sisters of St. Joseph of St. Augustine were celebrating the 50th anniversary of their mission to educate black students of Florida in April 1916, when the sheriff arrived. On orders from Gov. Park Trammell to enforce the law, the sheriff arrested Sister Mary Thomasine Hehir, Sister Mary Scholastica Sullivan and Sister Mary Benignus Cameron. The charge: being a white teacher and “unlawfully teaching negroes in a negro school.”

The arrest of three Catholic sisters attracted national attention and may have even helped propel an open bigot and conspiracy theorist to Florida’s highest elected office.

Sidney Catts, a Baptist preacher, insurance salesman and populist Democrat running for Governor in 1916, concocted elaborate conspiracy theories designed to stoke the fears among Protestant white voters of his day.

On the campaign trail in 1916, the flamboyant Catts made outrageous accusations that Catholics at St. Leo Abbey in San Antonio, Fla., were hording weapons under the church to aid blacks in an armed revolt on behalf of the German Kaiser Wilhelm II. A successful revolt, he warned, would result in Pope Benedict XV moving the Holy See from the Vatican to Pasco County. Once there, the theory ran, the Pope would order all Protestant churches in the state to be closed.

For Catts, the trial of the three sisters for defying state race laws lent credence to these ideas. Highlighting the trial on the campaign trail, Catts argued that Catholics wanted to destroy public schools, and overturn the democratically approved social order of Jim Crow. According to Mattick, the historian, the sisters of St. Joseph and their defiance of state law were  portrayed “as an example of how Catholic power spelled changes in Southern racial arrangement.”

Sidney Catts initially won the Democratic nomination, but a recount forced him into the Prohibition Party. He would go on to win the general election.

Meanwhile, following the arrest of the sisters, black schools across the state remained closed as they awaited a verdict.

On May 20, 1916, Judge George Cooper Gibbs ruled that the 1913 law violated the state constitution and the 14th Amendment to the U.S. Constitution. Gibbs held that the law discriminated against people not only because of the color of their skin, but because of their profession. He wrote:

Ultimately, the judge ruled that the law barring the teaching of black children could only apply to public schools. In his determination, the state had no authority to regulate private schools in such a manner. Segregation in Florida Public Schools would continue for another half-century, but dozens of black private schools were allowed to remain open thanks to his ruling.

St. Benedict the Moor School eventually closed in 1968 as Florida began to desegregate its public schools.

The Sisters of St. Joseph — like countless other educators across the South, from Mary McLeod Bethune to the founders of the Mississippi Freedom School — found a way to educate black students at a time when many public institutions and leaders would not. Their struggles reveal how new and alternative educational options have always had to fight for their survival. But they make today’s fights look easy by comparison.

McGoldrick, Sister Thomas Joseph, “Beyond the Call, The Legacy of the Sisters of St. Joseph of St. Augustine, Florida.” 2007.