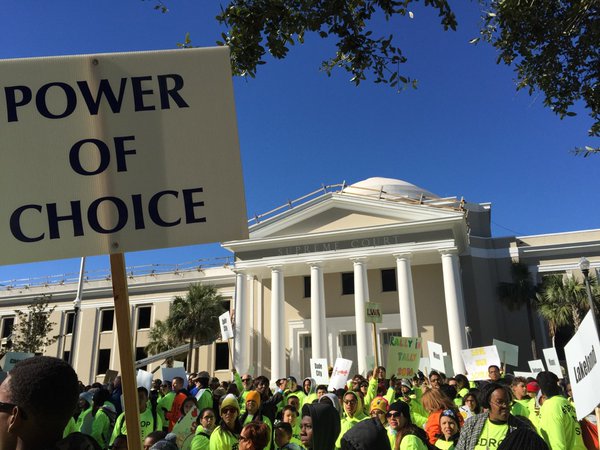 The legal battle over the nation’s largest private school choice program is over.

The lawsuit challenging Florida’s tax credit scholarship program ended this morning, when a five-judge panel on the Florida Supreme Court declined to hear an appeal.

The 4-1 decision leaves in place an August ruling by the First District Court of Appeal, which found the statewide teachers union and other groups behind the suit did not have standing to bring the case.

“The court has spoken, and now is the time for us all to come together to work for the best interests of these children,” Doug Tuthill, Step Up’s president, said in a statement. “We face enormous challenges with generational poverty, and we need all hands on deck.”

After McCall v. Scott was first filed in 2014, supporters of the program — including parents and clergy members — waged a full-court press supporting the program. Almost exactly a year ago, they staged a massive rally in Tallahassee.

“On behalf of all the scholarship children, their families and their clergy in the Save Our Scholarships coalition, I commend the state Supreme Court on their wise application of the law,” Rev. R.B. Holmes of Bethel Missionary Baptist Church in Tallahassee, said in a statement. “We look forward to working together with all parties to improve the educational outcomes of low income children in our state.”

Lawyers for the Florida Education Association and other groups had argued the scholarship program steered money to private religious schools, and violated a provision in the state constitution that mandates a “uniform” public school system. The scholarships, they contended, were similar to school vouchers the high court struck down in 2006.

Trial and appellate courts both dismissed the tax credit scholarship case after concluding the union and other groups backing it (including the NAACP and League of Women Voters) could not show the program harmed public schools.

Barbara Pariente, who wrote the majority opinion striking down vouchers in Bush v. Holmes, was among the 4 justices who voted not to grant the appeal in McCall v. Scott.

In a statement reported by the Orlando Sentinel, teachers union president and lead plaintiff Joanne McCall expressed frustration with the courts’ decisions, and asked: “Who is allowed to challenge the constitutionality of the tax credit vouchers?”

“This ruling, and the decisions by the lower court, don’t answer that question. We still believe that the tax credit vouchers are unconstitutional, but we haven’t had the opportunity to argue our case in court. We’re baffled that the courts would deny taxpayers the right to question state expenditures. This decision has ramifications beyond this challenge to a voucher program.”

McCall said the union would continue to “examine the question of standing and how to get the constitutional question before the courts.”

Florida judges’ reasoning echoes their counterparts in other states, as well as a 2011 U.S. Supreme Court ruling that dismissed a lawsuit challenging Arizona’s first-in-the-nation tax credit scholarship program. Courts in each case rejected lawsuits after drawing a distinction between tax credits that support private donations, and vouchers funded directly from the public treasury.

Today’s ruling brought sighs of relief from Florida parents, including Faith Manuel, who relied on a combination of public and private schools to educate her children.

“My children’s ability to choose the school which worked for them has made all the difference in their individual success as students,” she said. “I’m so thankful that this program will have the ability to continue to make a difference for Florida’s students!”

This is a developing story. Please check back for updates. Lisa Davis contributed.